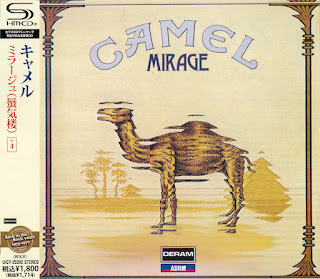 Probably Camel’s most popular album and their best work, the group’s second effort Mirage both expanded and improved upon their self-titled début. Having truly found their sound and gained incredible confidence and daring in their writing and playing, this progressive classic opens strong and ends even stronger. “Freefall,” with its booming opening, outstanding guitar lines, seemingly effortless mood –and tempo changes and fitting vocals, is a definite statement about what Camel could unleash. Which, when listening to Mirage, was something quite astounding.
Split between the three vocal tracks that make up the beginning, middle and end of the album are two superb instrumentals. The shorter, more laid-back and playful “Supertwister” features a first appearance of Latimer’s abilities on the flute, introducing a new element that would play a part in Camel’s sound on many subsequent albums. The longer “Earthrise” is a free-flowing jam that features some fantastic interplay abilities between the quartet and is a perfect example of their strong chemistry.
Mirage’s most compelling moments are however its two epics. The middle track “Nimrodel/The Procession/The White Rider,” is once again full of signature Camel moments: Latimer’s gorgeous melodic guitar lines, relaxed vocals, Ferguson’s typical deep bass sound, and a smooth flow that makes it seem shorter than the nine minutes it actually takes. The group’s storytelling ability is most prominent here. Latimer wrote the song about the Gandalf character from The Lord of the Rings (those fantastical kind of themes were really hip among the rock bands of the era, after all), which is easily derived from the lyrics: “Once he wore grey/he fell and slipped away/From everybody’s sight/The wizard of them all/came back from his fall/This time wearing white.”
In traditional manner, the best epic is of course saved for last. Lady Fantasy, written together by the entire band (most of the band’s compositions were written by Latimer and Bardens), is one of the true highlights of Camel’s career. The lyrical content may actually be a little cheesy, but flows wonderfully with the music. Each section is extremely well though-out and Latimer’s playing, especially his highly emotional lead that recurs throughout the song, is to die for. These 12 minutes top off the accomplishment that is this record with proud determination, and are a reminder why it is held in such high regard. Mirage is a definite progressive classic, and should be owned by anyone who pronounces himself a fan of the genre.
Prog- Sphere 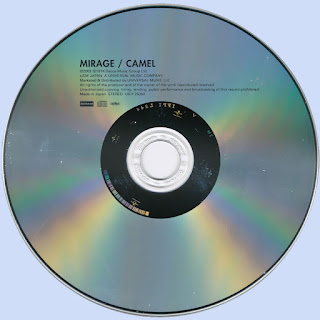