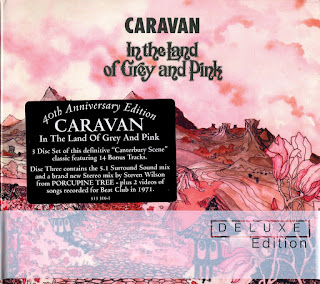 There isn’t sufficient space here to give a full description of what has been collected on the three discs of this thoroughly deserved Deluxe Edition let alone explain just how good an album In The Land Of Grey And Pink is or its standing as one of the cornerstone albums of 70s prog and the Canterbury scene.

The in-a-nutshell list of ingredients is: what sounds like the 2001 remaster of the full album; Steven Wilson’s new mixes of the album in both stereo and 5.1 surround sound; a fascinating previously unreleased new version of Nine Feet Underground (completely different lead organ and sax tracks different vocal track on the second part – Dave Sinclair singing in place of Richard Sinclair); different versions and/or mixes of some album tracks and non-ITLOGAP songs including Frozen Rose and Aristocracy; five 70s radio-broadcast live sessions including Nine Feet Underground and the title track; video of Golf Girl and Winter Wine from contemporaneous German TV show Beat Club the latter previously unseen alone almost worth the price of admission given the scarcity of period footage around.

For many the jury’s still out on 5.1: clever for sure but is it what the artist intended their music to sound like? Whatever it’s here if you want it. And presumably with the right drugs you really can feel like you’re listening to the album from somewhere inside Dave Sinclair’s Hammond.

There’s nothing particularly radical in the new stereo mixes: it’s all quite subtle and unintrusive – a slight reduction in the presence of the guitars during the keyboard solo on the title track. Most noticeably the left-right dynamic has been tightened up with much less panning of individual sounds than there is on the original CD issue. On Winter Wine for example there’s less drifting of the angelic voices and the tinkling piano passage and the few seconds of wah-wah organ that used to pan back and forth rapidly is now anchored tightly in the centre; meanwhile the trombone at the beginning of Golf Girl has been moved in a touch from its original hard-right position.

Overall though there’s nothing in the new mixes that really stands out as being notably different from what fans will know and love which is what one would hope to be the case. And even though the album has been remixed rather than remastered (so no sound ‘polishing’ as such) there must have been some temptation given the studio technology voodoo available these days to ‘airbrush’ some things. But reassuringly the ‘pops’ when Dave Sinclair kicks in his wahwah pedal still pop and Richard Sinclair’s jarring bum-note (so wrong you can’t even call it jazz) 5’ 20” into Nine Feet Underground remains just as jarring – and now comes in glorious 5.1 surround sound.

With the 40th Anniversary Deluxe Edition one of prog’s pivotal must-have albums has just got even more indispensable.
by Paul Henderson 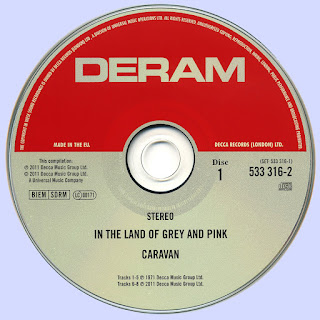 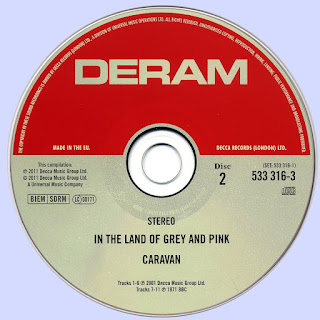 Free Text
Text Host
Posted by Marios at 9:11 AM No comments: