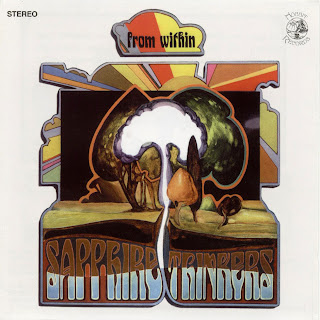 It doesn't happen very often, but here's an album that I instantly fell in love with ...  Unfortunately there's little or nothing to be found about The Sapphire Thinkers in either hardcopy or on-line reference works.  So here's what little speculative material I can add to their slim biography.  Given their album was mastered at Pasadena's Artisan Sound Recorders and released by the Hobbit label which was a subsidiary of the L.A. based GRT Records, they were probably from California.

Curiously, at least one well known reference work compares the mysterious Sapphire Thinkers to Grace Slick and The Jefferson Airplane.  While there's nothing wrong with being compared to such a stellar outfit, it doesn't really do this outfit a favor since it's not a particularly accurate comparison.  With Bill Richardson credited with penning eleven of the twelve songs, 1969's "Sapphire Thinkers" reminds me of a heavily drugged out version of The Mamas and the Papas, Spanky and Our Gang, or perhaps a less eccentric, but heavily dosed version of The Free Design.

Like those groups, these folks had a penchant and talent for crafting gorgeous, highly commercial sunshine pop - though their version was assisted by the consumption of various illicit substances (yes, I do believe those were mushrooms on the Kevin Leveque cover art).  Complete with mesmerizing melodies and hypnotizing harmony vocals (both Bill and Peggy Richardson had great voices), songs such as 'Get Along Boy', 'Let Her Come In' and 'Please Understand' would have sounded great on top-40 radio.  Even better was 'There's a Woman'.  You just had to scratch your head and wonder how radio missed the song.

The main difference with their better known competitors was that while catchy and commercial, tracks like 'I Feel A Bit Strange', 'Feel It From Within' and 'Blind with a Borrowed Light' had a distinctive psych edge.  Propelled by some neat studio effects including harpsichord, pulsating organ, Peggy's occasional flute, droning vocals ('Please Understand'), and Spehek's fuzz guitar (check out his work on 'Blind with a Borrowed Light' and, 'Doin’ Alright', or his equally impressive jazzy moves on 'From Within'),  the album sported a definite acid fueled aura.  Fantastic through and through ...
Bad-Cat 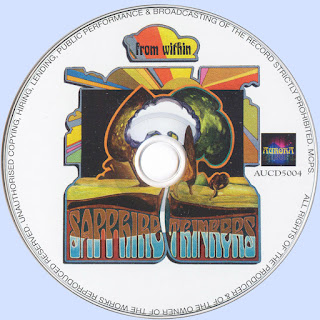 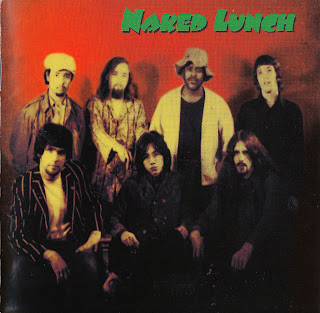 Four Decades after WOODSTOCK, these fabulous recording sessions see the light of day for the first time. This album contains 5 studio tracks from 1969, recorded at the popular 'Mu House' by the panhandle in San Francisco's Haight & Ashbury where the likes of Janis Joplin, Grateful Dead, Paul Butterfield Blues Band with Michael Bloomfield frequently played music. Plus, 2 live tracks from 1970 during their 'Hight Time' best! An added bonus of 4 songs from Banda de Jesus, (a band which included 3 original Naked Lunch members), recorded by David Rubinson & Fred Catero at Pacific Recording in San Mateo, CA circa 1972.

To put it in a genre ... it blends the best of Latin Rock, with 'rare grooves, and tricky jazz/funk elements'. Highly addictive melodies, with emotional vocals, pulsating beats with floating conga rhythms, soaring electric guitar, whirling Hammond Organ, and a punchy Horn-duo, create powerful arrangements to set your home stereo ablaze. This release tells the story , musically, but also in extended linernotes, and rare photos (20pg booklet) the evolution of the band which was founded in the Summer of '69. Led by 16 year old Abel Zarate (Gtr & vocals) to become one of SF's hottest live acts in 1970 - a record deal with Bill Graham's Fillmore Records was in sight, but NL was too 'raw', and energetic to be reigned in and 'commercialized'.

But now you hear it, remastered to a fresh dynamic sound from the original sesssion tapes. The trio from NL, Murray (trumpet), Spremich (drums), and Zarate took a huge part in helping to create the sound of Latin Rock group MALO, on their 1972 debut record, and helped that band become one of the premier Latin Rock groups of the era.... HERE ARE THEIR ROOTS! The sum of the music, and the intensity of these recordings can be compared to SANTANA'S Woodstock performance, with a bit of Hendrix-vibe, and Blood, Sweat & Tears influence. Truly a HIGHLIGHT of an almost forgotten San Francisco original.
World In Sound 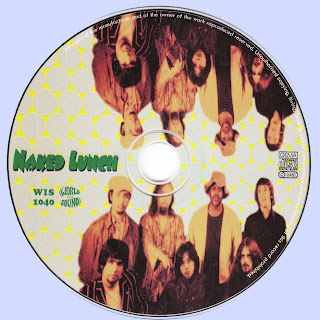 Free Text
Just Paste
Posted by Marios at 7:46 AM 6 comments: