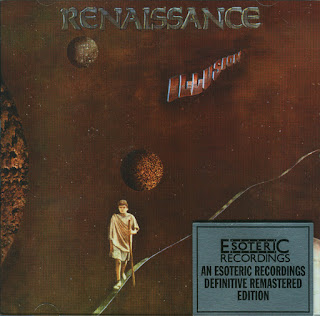 Although perhaps less adventurous, Illusion was on a par with its predecessor, being more disciplined and tunefully stronger, sign posting later Renaissance albums and the growing maturity of Relf and McCarty as songwriters. Unsurprisingly given its title, the opening song Love Goes On is a straight forward ballad with a chorus that’s both compelling and hypnotic. Golden Thread harks back to the first album with an extended piano intro although it’s more melodic in its structure. It develops into another memorable choral chant, with lead vocals by McCarty, interspersed with intimate piano moments that put me in mind of very early Genesis.

Love Is All echoes the sentiments of the opening song with a very similar feel whilst Mr. Pine is the track recorded with the Dunford/Crowe/Korner/Slade line-up. Written by Dunford, it’s arranged in three separate sections. The short opening song is folky and engaging, the mid-section more strident with echoes of King Crimson and Hawken (uncharacteristically) playing Hammond which he swops for harpsichord when the song returns to the mellow opening.

The tranquil Face Of Yesterday shows how Jane has developed as a vocalist, sounding more confident for the most delicate song recorded by the line-up thus far with beautiful instrumental work from Hawken, Cennamo and Relf. It’s a perfect foil for the bands lengthiest piece to date, Past Orbits Of Dust which follows. The edgy atmosphere is characterized by the rhythmic electric piano of guest keyboardist Don Shin and although very well played, for my money the more refined playing of Hawken is sadly missed. It also drags on longer than necessary with much self indulgent soloing contributing to the tracks length.

The three bonus tracks included by Esoteric are not in reality Renaissance material but are worthy additions anyway. These include two songs composed by McCarty and recorded in September 1970 for the soundtrack of the film ‘Schizom’. The dreamlike Prayer For Light is reminiscent of KC’s Epitaph although taken at an even slower pace and Walking Away continues in a similar vein with some lovely classical guitar playing. The last track All The Fallen Angels is a demo assembled by Keith Relf in April 1976 for a new band Illusion which was to feature the original Renaissance line-up. His voice seems to have deserted him on this occasion although the Mellotron backdrop and Cennamo’s poignant bass compensate. Sadly Relf was the victim of a fatal heart attack the following month after he was electrocuted at home playing guitar.

Possibly due to the fractured recording of the Illusion album it was only initially released in mainland Europe, Renaissance fans in the UK had to wait until 1976. In the meantime Michael Dunford assumed leadership of the band and the departure of Jane Relf soon after opened the door for Annie Haslam to begin another chapter in the bands history. But that’s another story, for now these two excellent releases, restored to pristine condition by Esoteric, are here to enjoy.
by Geoff Feakes, 2011 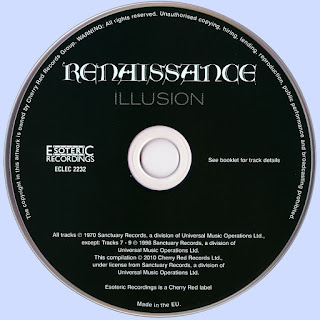