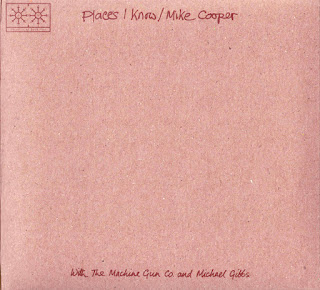 In the '60s, Mike Cooper was vital to folk and blues music in the UK. He established an important club for players of the genre and worked to get the Matchbox label up and running. He'd record for that label and other independent imprints. He put out his first album, Oh Really? in 1969 and its follow-up "Do I Know You?" in 1970. The latter of these two albums was the first to feature Cooper's own compositions. He was growing as a musician and as a songwriter, and people were taking notice. The Rolling Stones asked him to join the band, though he declined. That spot eventually went to Brian Jones.

Paradise of Bachelors, a label now officially at the forefront and exciting and crucial reissues of overlooked records, has now released reissues of Cooper's third and fourth albums and reveals a time in which the ever-shifting, ever-experimental musician was at his creative peak. In truth, Trout Steel's follow-ups, Places I Know and The Machine Gun Co. with Mike Cooper, were originally released as separate albums. But Cooper initially intended them as one expansive double-album, and so Paradise of Bachelors presents them together here and, like Trout Steel, have reissued them on vinyl for the first time with Cooper's approval.

After Cooper worked out how to make records on his first few recordings, Trout Steel is his recorded coming out party. Part of the draw of the album is that it finds Cooper pulling free of the scene he helped strengthen. He had toured and played with the likes of Michael Chapman and Bert Jansch. And if those guys stretched folk and blues traditions in their way, Cooper doubled-down on their intentions with this record. It's certainly a record that has its straightforward charms. Opener "That's How" is a classic bittersweet ballad, all lush guitars and full bass shadowing them. Cooper's voice is honeyed but just rough enough around the edges. But if it's a direct tune, it also hints at big changes to come. The saxophone solo starts as traditional pop filling, but Cooper lets it run and it opens up into something closer to free-jazz vamping.

The free jazz movement was important to Cooper's expanding sound, and this first song offered just a taste of it amidst its straight-ahead structure and simple pleasures ("sunshine and wine," Cooper sings, "she knows they mean much more to me"). The album has other similar highlights that recall Cooper's blues-folk start. "Don't Talk Too Fast" certainly contains some of the bitter grin of Michael Chapman's work, though the guitar work gets complicated and tangled behind Cooper's strong vocal melody. Closer "Weeping Rose" is a beautiful bit of pastoral folk, and if the playing is complex, its effect is still sweetly direct. But the album's brilliance comes in the ways it breaks from traditional forms in freeing and exciting ways. "I've Got Mine" is both the most obvious and most striking example.

Dusty guitars and shuffling drums set the pace, but they are overrun by a back-and-forth between strings and improvisational woodwinds. Thundering piano fills the space between, but the song seems to just continue to spread out, like a shadow as the sun moves, and it is by turns challenging and beautiful, earthen and ethereal. You can hear the influence of Pharoah Sanders on this song (and others). But if it is as transcendent as Sanders's best work, it is also more inviting than Sanders usually was. With Sanders, the awe came in watching someone else's spiritual musical experience. On Trout Steel, Cooper invites the listener into that transcendence, even evokes it within the audience.

As a double-album, Places I Know / The Machine Gun Co. with Mike Cooper is more deliberate in its move from structure to experimentation. Cooper initially intended Places I Know as a sort of cover album, a way to pay tribute to his influences by putting them at the forefront of his sound. And so you get the hazy country sway of "Country Water", the shuffling blues-rock of "Paper and Smoke" or the front-porch intimacy and beautiful slide work of "Now I Know". Unlike other experimental and improvisational players, Cooper proves himself just as comfortable with defined song structure. These songs are still wide-open, but they also thump with immediacy and are deeply infectious. They represent a fitting ode to Cooper's predecessors but also confirm his own confident and impressive talents.

But The Machine Gun Co. is the most exciting music to be had in these reissues. Cooper was smart enough, or giving enough, to lead listeners into his musical world with more direct songs before hitting them with his more eccentric side. But after those great songs, the nine-minute "Song for Abigail" is both beautiful continuation and revelation. It starts with sweet guitars and organs warming the space behind Cooper's voice, and the song mostly holds its shape. But it's also playing with space all the way through, carving out crags in the song as it goes, so when the song finally does blow open into its skittering close -- full of frenetic, shuffling drums, brittle guitars, and unpredictable organ solos -- it feels like a natural evolution and not forced vamping. It owes as much to the careful studio work of Miles Davis's late '60s and early '70s records as it does to the more spiritual free-jazz stuff.

Cooper and his Machine Gun Co. Band, which comprised a number of brilliant improv players, are at their finest on the 15-minute "So Glad (That I Found You)". The title implies a simple and plainspoken joy that runs through all these recordings, even at their most lost and troubled, and this song puts that wild joy to song in all its glory. Organs and guitars squawk and squeak to life at the start, establishing the song's distant, malleable borders. At its heart, the song is a funky sunburst of sound driven by syncopated drums and sweet guitar hooks. But it's also filled out and set on a tilt by bizarre horn phrasings and dissonant fills. The song breaks itself apart into a chunky breakdown, where the organs and horns battle for attention over a lean beat that shows its cracks at all the right times. It is far and away the most experimental moment on either of these albums, as even the drums give way to saxophone and keys and if the song never quite comes back together, it also never loses its shape, crashing back to life in one more expansive burst at the end.

Trout Steel and Places I Know / The Machine Gun Co. with Mike Cooper are both excellent records, but they also tell a vital story about a important musician in modern music. Cooper was not one to sit still. He would get more experimental and improvisational from here, eventually moving into electronic music as well. But these two albums capture Cooper at a pinnacle, where his newly honed songcraft and his knack for complicated sound and space met, clashed, and also combined in exciting and brilliant ways. Unlike many artists, Mike Cooper always knew you could never stand in the same river twice. And so these albums aren't about one part of the flow, frozen in time, but rather they show the results of Cooper letting things wash over him, letting songs and records change as they are being written and recorded. They are unpredictable and, yet, there is also something comforting and recognizable about these songs. These are reissues, but they may as well be new albums. They are as fresh as the latter and as lasting as the best of the former.
by Matthew Fiander 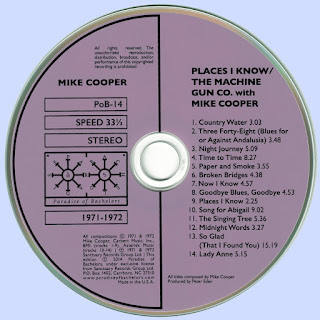 Free Text
Text Host
Posted by Marios at 10:54 AM 3 comments: