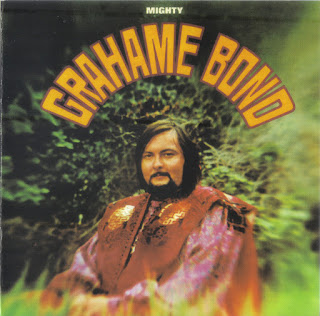 The best music comes out of misery, they say. In the history of music there has always been a special place for tragic people like Nick Drake, Syd Barrett, Keith Moon, Janis Joplin, Jim Morrison, Jimi Hendrix, Ian Curtis, Kurt Cobain, recently Amy Winehouse and many others. All gifted people who added something to the music scene, but couldn't cope with the lifestyle, the pressure and the fame. Live fast and die young: the myth of (rock) music that made icons of them. They died to make their legacy immortal; in this case Syd Barrett forms an exception, although his musical career ended in 1970.

Graham Bond (1937-1974) - on both records named Grahame, but his real name was Graham - also fits in this list. He was well-known in the British rhythm & blues scene of the sixties. He was also an innovator, introducing the Hammond-organ and the Mellotron in blues music, as well as introducing elements of jazz and free form music. At first he was a member of Alexis Korner's Blues Incorporated and later on he formed his own band: the Graham Bond Organisation. This band featured, amongst others, Jack Bruce, Ginger Baker and Dick Heckstall-Smith. They recorded a couple of blues albums and were very active in the live circuit. In 1966 the band started to fall apart. Since Bond was addicted to drugs, he took heroin and cocaine. This, combined with a failed marriage, made him unstable; Ginger Baker was backing him up as the group leader. However, Baker and Bruce left the band to form Cream together with Eric Clapton.

Meanwhile a new psychedelic underground scene was emerging in London, with bands like Pink Floyd and Soft Machine. Rhythm & blues had become old-fashioned. It was time for something new and Bond was inspired by the new scene. He absorbed the psychedelics and also formed an interest in the occult, which would break the surface in his lyrics. He put an end to the Graham Bond Organisation and assembled a new group of musicians with whom he'd play on a variable basis. He also came in contact with The Fool, a psychedelic design team noted for their work with The Beatles. This group oddly had managed to get a contract to record an album with Mercury, despite their inability to play musical instruments within a certain degree of competency. So they invited Bond to be their musical director and to join them in New York. He did, and thanks to Bond the album was recorded and released. During his stay in New York, Bond met Jimi Hendrix and they jammed together, although no recordings from these sessions have been released.

During the recording of The Fool's album, Mercury's executive Irving Green suggested Bond to move to Los Angeles to record a solo album for the newly formed Mercury subsidiary imprint Pulsar. In Los Angeles he jammed with Doctor John, Jefferson Airplane, Grateful Dead and Jimi Hendrix as well as contributing to albums from Harvey Mandel and Screaming Jay Hawkins. In September 1968 he recorded his first solo album Love Is The Law together with drummer Hal Blaine. Bond played all the other instruments like the Hammond-organ, Reed-organ, Mellotron, bass guitar and saxophones. Soon after the first album had been recorded Bond met former Crazy World Of Arthur Brown-drummer Drachen Theaker who had moved to California. Together they gathered some musicians and rehearsed for several months. With the new songs written and rehearsed, some studio time was arranged to record Mighty Grahame Bond. They could only afford one and a half day, but the entire album was recorded in about fifteen hours.

The words from the song Freaky Beak would turn out to be prophetic. 'Beak' was a term used by Bond to describe the music business executives. He had been staying in the USA under a tourist visa, so he wasn't allowed to work there. His record company had advised him to register the songs under the pseudonym Billy Gamble, but they didn't tell him that they had opened a bank account under the name of Billy Gamble, so Bond didn't receive a penny. With his visa running out he fled to Jamaica with his family. Eventually he accepted the offer from an agency to fly him and his family back to England. On his return he founded the band Initiation. He was also invited to join Airforce, the band from his former companion Ginger Baker. Both bands weren't much successful.

In 1971 he joined Jack Bruce's new band, but he was fired after three months. Then he teamed up with former Cream-lyricist Pete Brown to form Bond & Brown. They recorded one album before Bond's drug problems brought the band to a premature end. His erratic behaviour caused by his drug abuse, even led him to spend some time in prison and in a mental hospital. In March 1974 he came out, even more depressed. He stayed in a friend's place, but walked out on May 8, 1974. Two days later he met his death under a tube train at Finsbury Park Station in North London.

Both his albums Love Is The Law and Mighty Grahame Bond weren't successful at their release. They were only released in the USA where Bond wasn't well-known. Some tracks were released in his home country on a compilation album Bond In America. After his death these albums became highly wanted. They're Bond's most honourable legacy. At the time his musicianship wasn't too much affected by his drug abuse, and he took full advantage of the musical liberty of the late sixties. His music is dominated by the Hammond-organ, through which Bond exposed his tortured soul. He has a good and weathered voice which perfectly fits the music. These albums are enjoyable because the music is genuine.
by Erik Gibbels 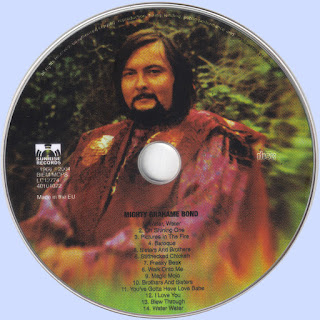 Free Text
Text Host
Posted by Marios at 8:07 AM No comments: