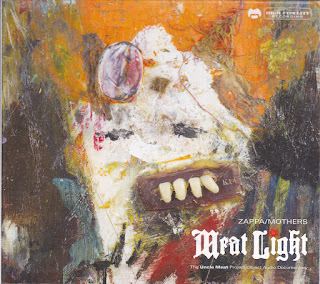 If you were paying close attention to the UMG-released Zappa titles, you may have noticed that Uncle Meat was one of the few pre-1982 albums that wasn't reissued  using the original master tapes for the first time (all the Ryko masters were altered by Zappa). Meat Light remedies that by finally releasing the Uncle Meat original  vinyl mix, remastered from the original master tapes for the very first time on CD. The results are stunning. The album literally sounds better than it ever has, with  a crisp clarity to all the instruments, even on the most dense tracks. This alone would justify purchase for most Zappa fanatics...but wait! There's more!

Who knew there was ANOTHER Uncle Meat?!? Yes, disc two and part of disc three present "Uncle Meat: Original Sequence." Many of the tracks are exactly the same, but  with different sequencing and some completely unreleased material, all segued together with some additional contributions from the Apostolic Vlorch Injector  (responsible for the blasts of noise on Uncle Meat and We're Only in It for the Money). "Whiskey Wah" and "The Whip" are previously unreleased guitar solos. "King  Kong" doesn't end the set; it's the end of "Side 2" (of four), and it doesn't include the part that was recorded on a flatbed diesel at a Miami Pop Festival. "Cops and  Buns" was included on The Lost Episodes, but in an edited form. Some of the other spoken bits ("Our Bizarre Relationship," "If We'd Been Living in California...")  have just a little bit of extra material on them, providing a bit of further insight. "Mr. Green Genes" has a slightly different mix with some additional organ and  vocals. The "Original Sequence" closes with "Cruisin' for Burgers"...but that's not the end of Meat Light! "A Bunch of Stuff" seems to be a spoken intro to the film  Uncle Meat. Tracks like "Tango" and "More Beer" are just short cues. The single version of "Dog Breath" is a gas: no main vocals/lyrics -- just prominent (and  awesome!) backing vocals with extra guitar and saxophone mixed in. "The String Quartet" is a medley of Uncle Meat tunes that was often performed live by the Mothers,  but this sounds like a studio version. "Electric Aunt Jemima" is a different, more modern-sounding mix, while "Exercise 4" is an unused further elaboration of the  "Uncle Meat Variations."

The alternate mix of "Mr. Green Genes" has a different vocal mix and cool keyboards added. "Echo Pie" takes Jimmy Carl Black's displeasure in  "If We'd Been Living in California" and kicks it up a notch or five. "1/4 Tone Unit" is a short, pretty chamber ensemble piece, "Sakuji's March" is a short percussion  piece, and "No. 4" is a scored piece with some amazing double piano followed by double marimba. The extended version of "Prelude to Uncle Meat" adds about a minute  and a half to the standard version, along with some interesting extra guitar at the end. "My Guitar (Proto 1)" is a ripping instrumental with FZ jamming on the "My  Guitar Wants to Kill Your Mama" riff. Hearing the guitar from "Nine Types of Industrial Pollution" played at the original speed is extremely interesting. You can hear  Frank playing acoustic guitar over a faint, slowed-down drum track. It's rare to hear Zappa play acoustic guitar at all, and his playing here is quite different than  what he's normally known for. The live version of "Uncle Meat" sounds great. The instrumental version of "Dog Breath" is a bit more refined and not quite as raucous  as the single version...until the guitar solo! Meat Light closes with an alternate mix of "The Dog Breath Variations." This is a set fans have been waiting for for  years.The sound is a huge improvement over all previous Uncle Meat CDs and the additional material is all excellent.

Uncle Meat is arguably Zappa's most avant-garde, most dense, most wide-ranging, and one of his most difficult albums for some. It's also one of his very best and  Meat Light really does justice to this masterpiece.
by Sean Westergaard 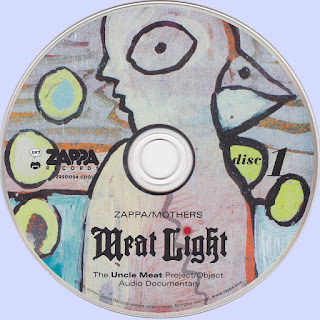 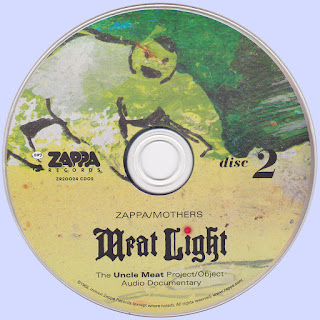 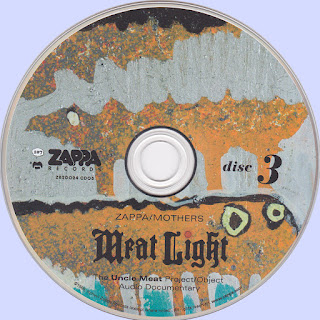 Free Text
the Free Text
Posted by Marios at 11:11 AM No comments: