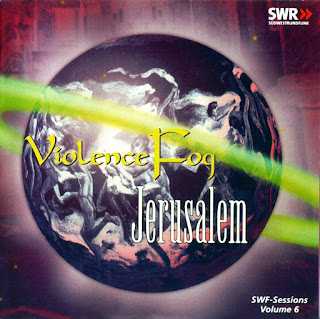 Violence Fog  founded in 1969 by members of local bands from the Baden-Baden area. After just a few rehearsals, the band was able to perform for bigger audience. In addition to their own compositions, their repertoire also included “Brother were are you” (Remo Four) and “Paint it black” (Rolling Stones). The band had a lot of fans who followd them  to their performances in southwest Germany, in youth centers and music clubs.
They also played on premieres and screenings of music films such as Easy Rider, Woodstock, Alice’s Restaurant and Let it be. There the band achieved a special effect with their elaborate Psychedelic-Light-Show projected onto the cinema screen. In mid-1970, the group had achieved national recognition. They decided to apply to the SWF to participate in this production series on the research promising groups.
This specific event took place on April 23, 1971 and the group recorded the songs in the radio's studio U 1 in Baden-Baden. Although the SWF recordings gave the band another boost and motivation, they broke up a few weeks later for professional reasons. Despite intensive research, no other publishable titles of this great band could be found.
Guitarist Enno Dernov and drummer Herbert Brandmeier left to play at Jud’s Gallery (SWF Sessions Vol. 1), but Enno Dernov decided to leave the group a few months before they started recording with the SWF. He joined Brainstorm and took over the bass on their second LP. The twin brothers Karl-Heinz and Wolfgang Höfer switched to folk music.
Jerusalem formed around 1969/1970 when Matthias Stein and Richard Ress left the group Intoxication and Hungry Love with Günther Rüffel, Wolfgang Hilgert and Bernd Lewandowski broke up. The 5 musicians, 16-20 year old schoolchildren or trainees, had already known each other as an integral part of the young music scene in and around Landau / Pfalz and wanted to set up something of their own because they tired of covering popular bands.
The highly motivated young musicians managed to perform  their own compositions and soon were the main attraction of the Landau music scene. In addition to the skillful interaction of the two guitarists (Matthias Stein and Günther Rüffel), the fact that JERUSALEM played with 2 bassists (Richard Reß and Wolfgang Hilgert) was particularly noticeable.
The band's music, committed to the progressive zeitgeist of the time, was an expression of the creative potential of each individual member and was enthusiastically received by the fans. On the occasion of various appearances along with well-known bands such as Ihre Kinder and Frumpy as the opening act. As part of a tour with Frumpy, JERUSALEM not only played in southwest and southern Germany, but also in Austria and Switzerland. JERUSALEM also performed with Fashion Pink (SWF-Sessions Vol.3), Roland Schaeffer's band. Roland Schaeffer was hired by the SWF as a producer for the youth group competition. JERUSALEM applied to the SWF and on June 4th, 1971 they recorded these titles in the radio's studio. All titles were broadcast on SWF 3's Pop-Shop program. Unfortunately, the band could not benefit from the further increase of their popularity.
A few months after the SWF recordings, guitarist and singer Matthias Stein died in a tragic motorcycle accident. Richard Ress, long-time friend of Matthias Stein's, was so shocked that he stopped his music activities and withdrew. These events marked the end of JERUSALEM. Despite intensive research, no further titles - unfortunately also no photos - of the band couldn't be found. The remaining musicians joined other local groups. Günther Rüffel currently plays in a cover band in his spare time. Bernd Lewandowski works as a freelance musician.
by Manfred Steinheuer, March 2001 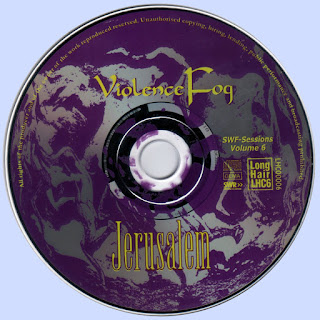