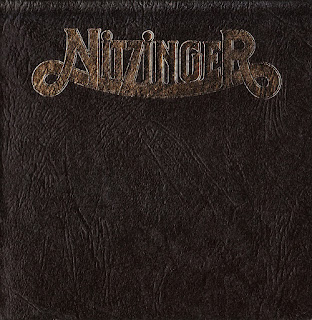 John Nitzinger is a Fort Worth, Texas guitarist and songwriter. In the very early 1970s, Nitzinger penned five songs for the Fort Worth band Bloodrock. When Bloodrock 2 went Gold, Nitzinger signed a contract with Capitol Records and his first album, the self titled Nitzinger, was released in early 1972.
Nitzinger's self-titled debut album was in fact the work of a budding Texan guitar cult legend -- the one and only John Nitzinger -- and his namesake power trio, whose music consisted of eclectic but still blues-drenched Southern hard rock and post-psych. The results include ZZ Top-style boogie and blues-rock ("Boogie Queen"), pre-Ted Nugent Gonzo guitar heroisms ("Witness to the Truth"), both of these at once ("Tickelick"), or neither, when it comes to the anthemic Southern rock of "My Last Goodbye," and semi-hit single "Louisiana Cock Fight." In addition, several cuts ("No Sun," "The Nature of Your Taste," etc.) see the trio augmented by soulful backup singers for a Mad Dogs & Englishmen sort of vibe, while others still see the versatile trio flirting with country-rock ("L.A. Texas Boy ") and plaintive balladry (the piano-enhanced "Enigma").
Yet the album's most intriguing/unique quality may be how the deceptively simple, universal, off the cuff material described above features obvious, if nuanced, sophistication, and is offset by lyrically weighty, post-flower power fare as seen in the aforementioned "No Sun" and "Hero of the War." And the fact that even these would-be progressive tendencies are kept to concise song lengths is what probably spared this album from utterly fatal dating; by extension, further separating Nitzinger's raised-on-the-jukebox-singles wheat, from the era's dominant music-conservatory-on-mushrooms chaff. Originally presented in a deluxe gatefold sleeve, it's not surprising that the Nitzinger LP has long been coveted by '70s rock collectors for the band's one-of-a-kind mixture of earthy grit and fearless (possibly naïve) flights of fancy.
by Eduardo Rivadavia 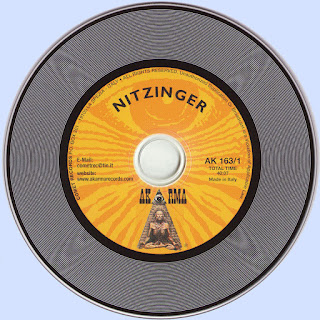