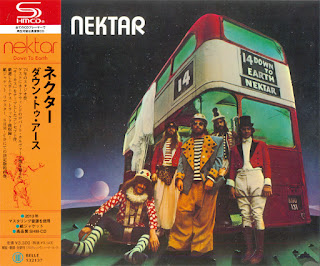 Nektar's follow-up to the critically acclaimed progrock masterpiece Remember the Future couldn't have been more of an about face. Originally issued in 1974, Down to Earth marked a decidedly more radio friendly sound for the band and unquestionably their most "commercial" sounding album to date. Gone were the psychedelic explorations and LP length epics in favor of no less than nine songs averaging four minutes. While early fans might have cried "sellout", Down to Earth actually contains some of Nektar's finest music and undoubtedly won them a whole new audience.
As guitarist/vocalist Roye Albrighton notes in the recent remaster, Down to Earth could be likened to The Beatles Magical Mystery Tour, particularly with regard to the circus theme atmosphere. The band even employed a ringleader in vocalist/Hawkwind poet Robert Calvert. His wheezy faux German accent probably added to the confusion as to whether Nektar were a Teutonic or an English band. Several guest artists make invaluable contributions, most notably soul singer P.P. Arnold on backing vocals. A horn section is also liberally applied to many songs, such as "Nelly the Elephant".
While Down to Earth features the largest production yet from a Nektar album, the music never feels overdone. At least three of the nine tracks would go on to become all-time Nektar stage classics, including the rocking "Fidgety Queen" as well as "That's Life" and "Show Me the Way". But the album's lesser known tracks are equally great songs, including the slightly funky "Oh Willy" and the lovely ballad "Early Morning Clown".
The Eclectic Discs remaster currently under review contains several original mixes as bonus tracks and while these are interesting to listen to for comparison's sake, the released versions on Down to Earth are preferable. Paschal Byrne once again delivers a great sounding remaster; indeed, all of his work on Nektar's back catalog is exemplary.
Down to Earth is an essential chapter in the history of Nektar. In many respects, it should have been the album to catapult them to worldwide fame, especially given the accessible nature of the compositions. Ironically, it was the band's last album to crack the American Top Forty. While we can lament the fact that they didn't enjoy the fame of Yes or ELP, we can rejoice in the knowledge that Nektar created some of the very best music the progressive rock era had to offer.
by Steve Pettengill 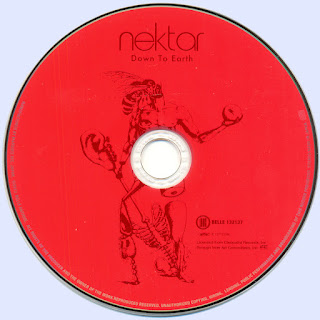