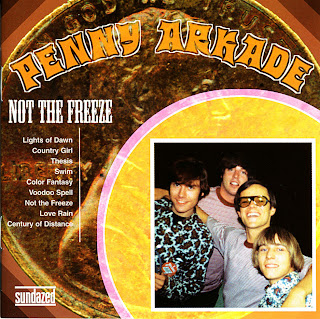 The Penny Arkade saga actually begins with two singers-songwriters-musicians -- Chris Ducey, then of California but originally from Brooklyn, New York, and Craig Smith of Studio City, California would become the very foundation of the yet-to-be group.

In the summer of 1965, Chris, then a college student, and Craig met for the first time in California. The occasion was the fourth audition callback for The Happeners, a mostly serious TV pilot about the trials and triumphs of a three-person, Greenwich Village folk-rock band. Winning the callback after six separate auditions, then 19 year-old Chris and 20 year-old Craig, who had to sing and play guitars as well as act on the show, were promptly flown – along with lovely Sussanah Jordan, who had auditioned for the role of the third member of the group -- to New York where the threesome competed against the East Coast winners who were vying for the same roles. Again the West Coasters won.

The Happeners hour-long pilot film was shot in fall, 1965, in New York City, with a cameo appearance by the Dave Clark Five, and with actors Louis (then simply Lou) Gosset, Jr. and Lou Jacobi in major roles. Chris and Craig sang their own original material written. The original plan was for The Happeners to air in a weekly time slot opposite a less serious but in some ways similar program on NBC – The Monkees. When The Happeners’ producers refused to cut their show down by half (the length of the NBC series), ABC withdrew the series from its schedule.

Craig had also auditioned for The Monkees, at which time he met Michael (or, back then, “Mike”) Nesmith , who would eventually become the producer and, in many ways, mentor and inspiration for the Penny Arkade. Coincidentally, Craig and Mike knew each also encountered one another as part of the folk music scene – Craig as a member of the Good Time Singers, Mike in the Back Porch Majority.

Although The Happeners did not…happen, something did happen between Chris and Craig. In 1966, out on their own as simply “Chris and Craig,” the duo secured a singles record deal with Capitol, cutting a number of sides including “Isha” and “Our Love Has Come” (included in this collection). And it was this Chris and Craig incarnation that constituted the true and official origin of the Penny Arkade.

During the months between the phasing out of Chris and Craig and the birth of the Penny Arkade, the two singers recorded (with John London, formally with the Louis and Clark Expedition) a double-sided demo to promote the newly re-forming band. The demo featured two songs – Chris’s “Rhyme or Reason” and Craig’s “(She Brought Me) Something Beautiful” – that would, in the group’s early days, become part of the Penny Arkade’s performing list. Unfortunately, copies of this seminal acetate record seem to have been lost (the only known disc, in the possession of Penny Arkade drummer-to-be, being lost years later in a flood).

The Penny Arkade had its first official meeting at Mike Nesmith’s home in the Hollywood Hills. Chris and Craig were there, of course, and also a 19 year-old drummer from Corpus Christi, Texas. Bobby Donaho had almost waist-long blonde hair and a thick Texas accent. Most recently a member of the band Willowdale Handcar (AKA Mrs. McGrueder’s 3-D Rhythm Band), he had briefly met Mike in Texas before relocating, with a number of other Texan musicians, to Southern California. A luncheon with Mike’s wife Phyllis led to Bobby pursuing and then getting the Penny Arkade gig. Bobby had a perfect sense of timing – necessary for some of the tricky time signatures of Chris and Craig’s music. Fortunately all four of us – now the Penny Arkade – liked one another and jelled as a foursome, even though our personalities, in some ways, were quite different.

There was no specific lead guitar player present that night. As the Penny Arkade was not meant to be a typically “heavy” band, and emphasized Chris and Craig’s singing more than its instrumental backing, it was decided that either or both of them would handle the lead guitar parts. And while playing lead guitar was neither of the singers’ forte, they managed the required riffs admirably, with Craig nominally taking on the lion’s share.

The Penny Arkade played many of notable Hollywood clubs following that initial Screen Gems appearance – e.g., Gazzarri’s, the Magic Mushroom, Galaxy, Factory, Cheetah and Century 2000 (formerly Ciro’s, now the Comedy Store). We also played a dance at a Santa Barbara high school that almost led to a physical altercation. Apparently the school’s intent was to hire a band that played very familiar – and danceable – “Top 40” tunes. What the school got was a band that played all original material, some of which segued off into lengthy psychedelic instrumental breaks. It required some fancy diplomacy on our part to retrieve even part of the money promised us for that disastrous gig.

Through all our months together, our music continued to grow, Chris and Craig’s writing becoming more and more sophisticated. This created a kind of dilemma for Michael. As he sought to secure for us a deal with some major record company, Elektra and Kama Sutra among them, our music and our style of playing was rapidly evolving, becoming more complex and sophisticated. By the time Mike had some record company interested in us, the music we were currently doing was dramatically different from that he was pitching. By that time, also, we had ceased playing those earlier tunes during our nightclub appearances.

Later in 1967, with none of the band’s earlier recorded (and comparatively simpler) numbers yet released, Mike opted to green light our most ambitious and creative recording project to date -- the unofficially titled Not the Freeze album. The album would feature mostly new material, but included a few new, improved and tighter versions of some of the songs we had recorded in that original session. In addition to the album these sessions would record two singles – “Love Rain,” written by Chris, and “Century of Distance,” a Craig song that was also part of that first session. (Naturally Chris and Craig always performed the lead vocals in the songs they individually wrote.)

“Not the Freeze” (originally titled simply “The Freeze”) was a number, already of more than commercial-song length, written by Chris and having been recorded at one of the earlier sessions. For this new album, however, “Not the Freeze” was to be expanded to a fully blown rock concerto (predating such similar efforts as the Who’s rock opera Tommy). Supplementing its length would be several songs originally written as singles. These included “Hands of the Clock,” written by Craig and already recorded at Capitol by his then girlfriend Heather MacRae (and with an uncredited Penny Arkade providing background voices and additional instrumentation). The new and improved version of “Not the Freeze” would take up a single side of the album.

The Not the Freeze album gave Bobby and me a chance to do some “extra” performing. You’ll hear our voices, all the vocal tracks being recorded at Heider’s, in “Not the Freeze,” “Swim” (I’m the one yelling all the comic-book hero references) and “Voodoo Spell” (I suggested the “jungle drums” ending and did the John Wayne-inspired voice). Bobby and I played our regular instruments on “Thesis”; and while we continued to play our parts during live performances of this number, it was deemed more appropriate to delete them from the final mix and leave the acoustic guitars to carry the instrumental track.

The four of us, as the new Penny Arkade, recorded only one song – “Give Our Love (to All the People),” a collective effort written by Chris, Bobby and myself. As an experiment, Bobby recorded four separate drum tracks and I played octaves on some of my bass lines, contributing overall to a substantially heavier effect than previous Penny Arkade songs. After the piece was recorded, Monkees musical director Shorty Rogers was brought in by Mike Nesmith to add some brass embellishment to the recording.

Unfortunately none of the original Penny Arkade masters – nor copies of all of our songs – seem to have survived. Fortunately, back in 1968, I had the idea of making a copy of the original master tape of the Not the Freeze album, “Love Rain” and “Century of Distance.” Chris Ducey managed to turn up a nice acetate dub from the “Woodstock Fireplace” session, as well as one of “Our Love Has Gone.” By sheer accident, I also recently happened upon an old reel-to-reel copy, made either from the original master or an acetate dub, of some of the songs recorded in 1967 prior to the Not the Freeze album, these including the original shorter version of “Not the Freeze.”

My stint with the Penny Arkade included two of the best years of my life. Some of the memories of that time, preserved on the recordings presented on this CD, are offered here for the first time. Sundazed Music has done its best to ensure that the songs presented herein has been remastered and reproduced in its finest audio quality, given their myriad sources.
by Donald F. Glut 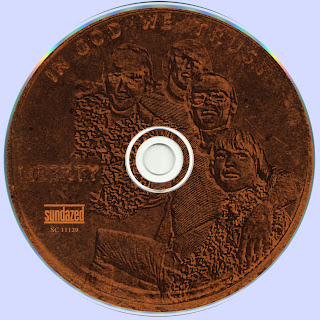 Free Text
Text Host
Posted by Marios at 8:51 AM 7 comments: