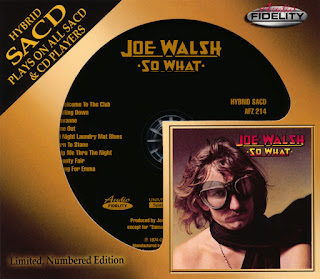 Joe Walsh got his start at a guitarist for the James Gang, which he left for a solo career in 1971. Known best for his efforts with the Eagles, it was Walsh's 1974 album, So What, that secured him a place with the Eagles after Bernie Leadon departed. Walsh is still credited as the guy that gave The Eagles's laid-back sound a swift kick in the ass.

First and foremost, Walsh is an unbelievably solid guitar player. Walsh belongs to a class of guitar player that hasn't surfaced in the 90's alternative rock scene. It's almost sad really. Walsh is really a master of his instrument, while recently formed groups can barely play (i.e. Veruca Salt, seen 3/15/97 on my_heart_sings_the_harmony_web_ad_alt_250 Saturday Night Live).

So What has a sound that is firmly rooted in the 70's. Today, the 70's feel is very refreshing. When you listen to So What, you feel like you've jumped back to the mid-70's again, which is a nice feeling. You catch all of the harmonized backing vocals that was a 70's staple, while listening to guitar work that is creative in any era.

"Welcome To The Club" has a enough rhythm changes to keep you hooked for hours, with signature Walsh guitars that build and fade meticulously. Lyrically, Walsh is a bit more subtle here than he's famous for, spinning a yarn about crazy situations on the road.

"Falling Down" has a soulful, western feel to it. The rhythm work is done on a 12-string, with most of the leads added delicately with a 6-string electric. Present again are the 70's vocal harmonies, which are layered so that they're almost ghost like.

On "Time Out", Walsh returns the style that made him famous on "Rocky Mountain Way." The song features a combination of standard and slide lead guitar that Walsh does so well. To date, I can't think of anyone who so perfectly combines these two styles. The drumming and bass are very prominent on this track. Walsh seems to let the rhythm guys hold the song while he paints over it. This isn't anything new, it's the standard Rx for rock and roll. It's just that when you listen to this album, you notice all of the ridiculously simple things that many bands don't do anymore.

"Help Me Through The Night" was the doorway into the Eagles and beyond. This was the first song that Henley, Frey and Walsh worked on together. With Henley and Frey on backing vocals, it sounds like the song is from Hotel California. While the presence of the Eagles is noticeable, the song still preserves the feel of the rest of the album.

While So What lacks any mega hits, it's probably his most beautiful album. With it's firmly rooted 70's style, it will show some signs of age on the turntable today. But its strengths, great guitar work, great vocal harmonies, and peaceful demeanor are timeless in any era. With So What in the background, a nice drink and a loved one nearby, the album promotes a wonderful "time out" to unwind.
by Bill Ziemer 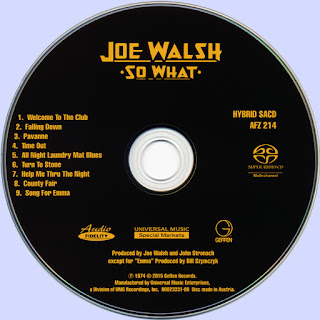 Free Text
the Free Text
Posted by Marios at 9:15 AM 3 comments: