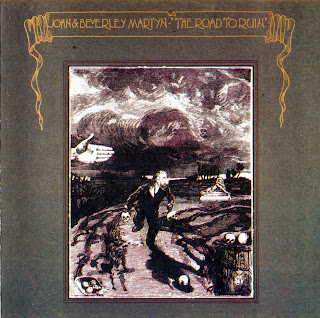 The posthumous release of guitarist/vocalist/songwriter John Martyn's Heaven And Earth (Hole In The Rain, 2011)—the basic tracks extensively overdubbed, though not edited, by producers Garry Pollitt and Jim Tullio following Martyn's death in 2009—is welcome. Compositionally, it is not one of Martyn's greatest albums, but it contains enough gritty blues/rock guitar, and retentions of the spacey vocal style with which Martyn forged some of his reputation, to satisfy his longtime followers. More than anything though, Heaven And Earth serves to remind us of Martyn's multifaceted 40-year discography, and the above-average proportion of masterworks within it.

Key among those masterworks is 1970's The Road To Ruin. This was the second, and final, album Martyn made with his wife, vocalist/songwriter Beverley, and followed the duo's Stormbringer (Island), released earlier the same year. A more genuinely collaborative effort than Stormbringer, the nine tracks which made up the original LP release of The Road To Ruin include one written by Beverley ("Primrose Hill") and three others jointly composed by Beverley and John ("Auntie Aviator," "Sorry To Be So Long," "Say What You Can"), on all four of which Beverley takes lead vocals. It is these tracks, along with Paul Wheeler's "Give Us A Ring," written for singer/songwriter Nick Drake and the only track on the album not composed by the Martyns, which give the album so much of its affective power and historical resonance. About this, more in a moment.

The other characteristic which distinguishes The Road To Ruin, and made it so adventurous for its time, is the instrumentation. In essence, the music is a folk/rock hybrid played by an acoustic (guitar and bass guitar aside) jazz lineup. The band included three of London's ranking jazz saxophonists: Ray Warleigh, Lyn Dobson (also heard on flute) and South African émigré Dudu Pukwana, each given ample solo space. They are heard alongside John Martyn on guitars (and the Echoplex introduced on Stormbringer), John and Beverley on vocals, pianist and co-arranger Paul Harris, drummers Wells Kelly and Mike Kowalski, and conga player Rocky Dzidzornu. Three bassists are variously employed, including, on one track, "New Day," acoustic player Danny Thompson, on the first of his studio recordings with Martyn.

Much of the horn work was added by producer (and folk/rock Svengali) Joe Boyd after the basic tracks were laid down. Pukwana, for instance, recorded a second solo on top of his extended primary solo on "Road To Ruin," consciously recreating a traditional African call and response pattern. Martyn later expressed reservations about this aspect of the album, saying the overdubs undermined the organic, in-the-moment feel he wanted. The criticism, however, was likely prompted by some other dispute Martyn was having with Boyd at the time, for The Road To Ruin, post-production and all, still sounds as in-the-moment as it gets. It reeks of atmosphere, one laden with incense, herbal aromas and a sense of community.

Which brings us to the historical resonance mentioned above. In commercial terms, The Road To Ruin was small fry: Martyn's breakthrough came a little later, with Bless The Weather (Island, 1971) and Solid Air (Island, 1973). But the album (with its pitch perfect Max Ernst front cover illustration) was common currency among London's counterculture, in no small part because of the Martyns' well known enjoyment of hash and weed, which seeps out of every groove and which is explicitly referenced in "Primrose Hill," "Auntie Aviator" and "Give Us A Ring." In its own, more pastoral way, "Auntie Aviator"—which starts unremarkably, but rapidly evolves into something mysterious and other, via the lyrics, Beverley's vocal delivery and John's theremin-like guitar lines—was in Britain as much of a psychedelic rallying cry as Grace Slick's "White Rabbit," from the Jefferson Airplane's album Surrealistic Pillow (RCA Victor, 1967), had been three years earlier. Martyn continued to enjoy dope for the rest of his life, and went through the statutory cocaine binge; the damage was done later by alcohol addiction.

But you don't have to have been there to enjoy it. The Road To Ruin, with all its historical baggage—societal and, informed as it so pervasively was by the Martyns' lifestyle, domestic—still sounds as exalted as it ever did.
by Chris May 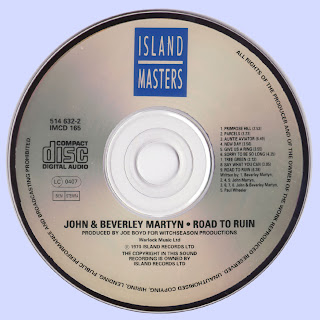