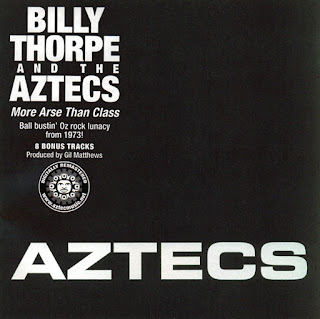 If you thought Crocodile Dundee was wild, then you haven't heard Billy Thorpe & The Aztecs, a rabble-rousing Hard Rockin' group from Down Under. These guys knew how to bottle lightning.
After listening to More Arse Than Class, it's no surprise that they were one of the most popular 1970's Hard Rock groups in Australia, but why haven't they gained fame in the United States where similar bands like Grand Funk Railroad, Foghat, and Bachman-Turner Overdrive were making names for themselves? I don't see any reason other than geography why they couldn't have made it big in the States.
The album opens with the rollicking “Boogie Woogie”, whose songtitle tells no lie, it is indeed a boogie woogie. It's also a peculiar boogie woogie, what with its menacing pace and crazy ascending key-changes toward the end. Billy Thorpe's powerful raspy vocals are also amazing to behold, bearing a resemblance to Roy Wood's, but with slightly more body. I also bring up Roy Wood, because “Boogie Woogie” reminds me of Wizzard. It's normal genre music, but with a slightly alien edge to it. And it's very good too!
Probably the greatest testament to Thorpe's vocal prowess is the epic closing track “Slowly Learning How”. It alternates back and forth between a soulful blues number and a tight rock'n'roll groove that resembles early Dire Straits. Thorpe's utterly soaring vocals have the same effect on me as Joe Cocker's, and bringing in a Gospel choir at the end only made me wish I could have joined in with them. That song is hardly amazing as a composition (it does nothing more than repeat those two sections for an entire nine minutes), but it's such a rousing experience that I'd gladly listen to it many more times.
“I Wanna Know” is also a Gospel-oriented number, and Thorpe's commanding lead vocals keep the song exciting. The melody is catchy, and I like the ascending chord progression its based on. But I'd have to say the star of that show is the wily harmonica solo in the middle. If one thing's clear about Billy Thorpe & The Aztecs, they were a first-class jam band.
And that fact about them couldn't be any clearer than it is on “Back on the Road Again”, a powerful rocker that's so tight and exciting I can't contain myself! (I'm not kidding, either, I'm hopped up on adrenaline right now.) It's obvious they're emulating 1950's rock, but it's impossible to not get caught up in its spirit. The drive of that song is amazing, and Thorpe's lead vocals take an incredibly commanding lead over it. Perhaps even more amazing is the extended jam sequence in the middle. It takes a lot for me to enjoy a rock'n'roll jam, but I rarely run across things this exciting. When the Jerry Lee Lewis-style piano solo comes in, it's like nothing could be more thrilling ... it starts normally, then starts to favor the high-pitched keys in the middle, playing some brilliantly weird patterns. The electric guitar solo operates in a similar fashion ... it's normal and exciting at first, but it turns into something more fuddled and hyperactive. Crikey!
Still good, but not one of the highlights is the energetic R&B number “Walking Down the Street”. Thorpe's spirited vocal that opens the track is hilarious (at one point nearly going off into a rant), but unfortunately whoever was in charge of producing this album did a weird number on the panning effects ... it's painful to listen to this song with headphones. “No More War” is apparently a psychedelic anthem, with a rubbery guitar throughout and a huge reverb on the vocals. It's jam-oriented, but it's not quite as arresting as the others I've mentioned.
It's a shame that Billy Thorpe & The Aztecs aren't well-known in America. This style of music is still very popular round here, and if I'm able to enjoy the crap out of this, then there are millions of others who are bound to like it more. Trust me, if you've had your fill of all the Foghat you can handle (as if that's possible!), and you're feel like visiting the land of wallabies and Vegemite, then you should put Billy Thorpe & The Aztecs on your list.
Even if you're not, then you should still consider giving them a try. After all, they seemed very passionate about rock'n'roll, and they could rock like nobody's business. That's more than I get from most Hard Rock bands. Plus, it's kind of cool to have an album called More Arse Than Class on your iPod, just to see the reaction on people's faces.
by Don Ignacio 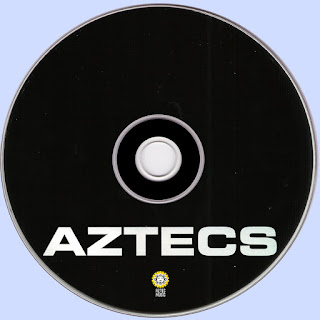