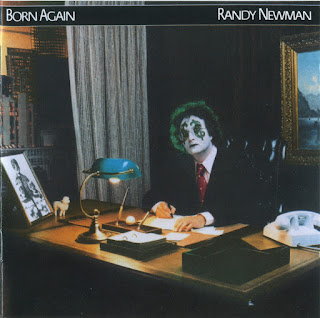 Born Again, Newman's seventh LP, may be his riskiest projects, since it's the vehicle for a flagrant and unusual degree of bitterness. But only Sondheim gets away with such bile.

On Born Again, Randy Newman addresses the Me Decade in a voice that's unremittingly snide. The album's tone is immediately established by a cover photo in which Newman poses as a prosperous young businessman with dollar signs painted, Kiss-style, on his face. "It's Money That I Love," the opening cut, suggests that in these cynical times, the only thing most Americans care about is material gratification. "Used to worry about the poor/But I don't worry anymore," crows a narrator for whom consumption is the best revenge against ordinariness. Unfortunately, this bourgeois Caliban, like most of the people on Born Again, is just a paper tiger on which Newman hangs his contempt. Not once does he stop to suggest any reasons for contemporary grabbiness.

"The Story of a Rock and Roll Band," a galumphing polka, sends up corporate rock by ridiculing the Electric Light Orchestra. Though the production cleverly glosses snippets of ELO's hits, the joke quickly palls. This is the first time Newman has treated rock & roll with unequivocal snootiness.

In the record's cheapest shot, "Mr. Sheep," a Seventies hippie lashes out at a briefcase-toting square. The moral irony is appallingly smug. We're supposed to frown on the hippie and pity the square, but we don't, since both characters are such ciphers that they're impossible to care about.

Born Again's dramatic setups ring as false as its moralism. The almost impenetrable "Pretty Boy" suggests an incipient street fight, but the song ends before the action starts. "Half a Man" pits a trucker against a drag queen, but Newman cops out by turning the encounter into a bad surrealist joke when the trucker mysteriously starts walking and talking "like a fag."

Glimmerings of the classic humorist who gave us Sail Away and Good Old Boys are evident in only two cuts, and both are mere scraps. "William Brown," the odyssey of a working man, has a beginning and an end but no middle. In "Ghosts," Born Again's best moment, an old man, deserted by his children and living in one room, cowers in fear and poverty. His final words are a mumbled "I'm sorry" for having lived at all. Set in Newman's florid Stephen Foster-cum-Gustav Mahler style, "William Brown" and "Ghosts" contain the LP's only interesting music. The rest of the tunes either listlessly parody bad movie themes ("Spies," "Pretty Boy") or stick close to the limited novelty rock of "Short People."

Ultimately, Randy Newman's Born Again sounds less like a coherent song cycle than a sloppy nightclub act whipped up at the last minute in a fit of pique and "produced" in a studio. How dismaying that the Mark Twain of American pop should have shrunk to the size of Martin Mull!
by Stephen Holden, October 4, 1979 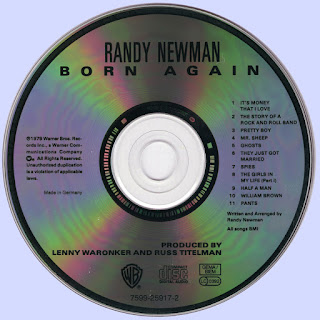