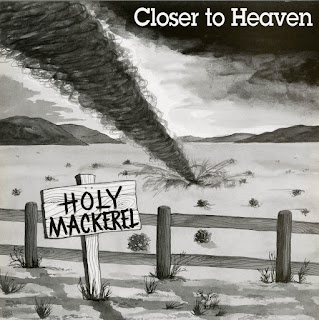 Holy Mackerel were formed in 1970 from the ashes of Kent-based psychedelic band Jason Crest. Three members of that highly regarded outfit - singer and chief songwriter Terry Clark, drummer Roger Siggery and guitarist Derek Smallcombe joined forces with local musicians Tony Wood and Chris Ware in an attempt to move towards a more contemporary rock sound. After a brief flirtation with the name Highway, the band settled for the more distinctive soubriquet of Holy Mackerel. They gigged incessantly, occasionally as headliners but often as support act to bands as diverse as Three Dog Night and the Sweet. As a result of their punishing live schedule, Holy Mackerel slowly established a considerable reputation on the thriving college and university circuit; indeed, the sheer volume of live work undertaken by the band ensured that they were financially secure enough to survive without the aid of a recording contract.

By 1972 Holy Mackerel were attracting capacity crowds in their own right, an achievement that did not go unnoticed within the music industry. The band finally accepted an offer from management agency General Artistes, who also handled unabashed pop acts like Vanity Fayre and Chicory Tip. Fronted by high profile entrepreneur Roger Easterby, General Artistes succeeded in obtaining a recording contract for Holy Mackerel from CBS Records.

The first of Holy Mackerel's four singles appeared on 27 October 1972 ('Rock-A-Bye' c/w 'New Black Shoes', CBS 8447). However, this was merely a taster for the band's eponymously-titled debut album which emerged three weeks later. 'Holy Mackerel' (CBS 65297) was a slightly tentative first step that bore the familiar hallmarks of a popular live band struggling to adapt to the differing demands of the recording studio environment. Nevertheless there were sufficient glimpses of quality to suggest that a second album might prove to be an altogether more substantial affair.

Shortly after the release of the Holy Mackerel album, Roger Easterby formed a new label entitled Santa Ponsa. Naturally enough Holy Mackerel were enticed away from CBS to become one of Santa Ponsa's first signings: the perils of a joint management and recording contract would only become evident at a later date. At the time a brave new world beckoned, particularly when Santa Ponsa quickly hit paydirt with the chart success of Guy Darrell's 'I've Been Hurt' (a mid-1960's recording leased with delicious irony from CBS).

Flushed with this early success, Easterby instructed Holy Mackerel to record a version of an old Bruce Channel song called 'We Got It Nailed Down' (Santa Ponsa PNS6). This track failed to register commercially when issued as a single in September 1973, as did the country chestnut 'Tennessee Waltz' (Santa Ponsa PNSI1) a few months later.

Undeterred, Easterby urged the band to proceed with the recording of their second album. They responded enthusiastically, with three members writing material of sufficient calibre to ensure that this album (given a working tide of 'Take A Deep Breath And Smile') would represent a quantum leap forward from their CBS debut. Holy Mackerel were already established as a crowd-pulling live act: with the aid of a supportive record company and some outstanding new material, surely this album would prove to be the vinyl breakthrough that they needed?

By the time that the album had been painstakingly pieced together in the studio, Santa Ponsa were floundering badly. Guy Darrell's unexpected hit had proved to be a one off rather than the start of something big: the label subsequently released a further two dozen singles without securing a second success. As a result, Easterby wasn't in a position to gamble with the release of an album without the financial safety net of a hit single. One of the more commercial tracks - Terry Clark's 'Ballad of Joe McCann', fortunately a better song than the tide would suggest - was selected as a single (Santa Ponsa PNS18) in early 1974. Its lack of success ensured that, by the time Santa Ponsa ceased trading later that same year, the second Holy Mackerel album had still not emerged.

Having lost both their management  and recording company in one fell swoop. Holy Mackerel's career was plunged into a protracted state of limbo. They briefly delayed the inevitable by electing to struggle on, although drummer Roger Siggery hailed out and was replaced by Dennis Elliott, who would subsequently join Foreigner. Terry Clark recorded a handful of solo singles under a variety of ludicrous aliases, the most notable being a version of 'Best Part of Breaking Up' credited to Eddie Fontana (Santa Ponsa PNS23 in October 1974). Overwhelmed by events. Holy Mackerel had slowly disintegrated by this stage: ironically the album that may have been their salvation remained unissued.

Twenty years later, 'Closer to Heaven' (which has been digitally remastered from the sole surviving acetate copy) is a fascinating but frustrating glimpse of what might have been. Perhaps the band were too eclectic for their own good, but their consummate mastery of various musical styles enabled them to mould a wide variety of disparate elements into a distinctive and fully coherent sound. Many rock bands of the era may have laid claim to the raging dual guitar onslaught of 'Judgement Day', but few would have been equally well-equipped to tackle the delicate beauty of 'Walk Through The Valley' without stumbling into mawkishness or parody.

Had "Closer to Heaven' been released at the time, the Holy Mackerel story may have had a rather differentending. This belated issue at least provides the band with a suitably impressive epitaph.
by David Wells, September 1993 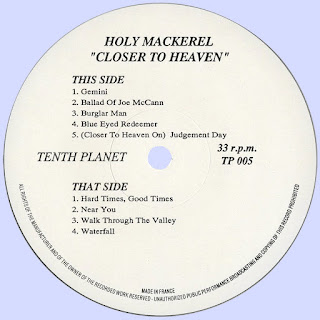 Free Text
Just Paste
Posted by Marios at 6:49 AM 2 comments: