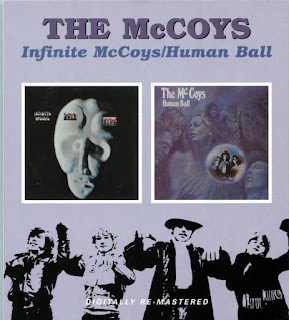 Formed in Union City, Indiana in 1962, this group was initially comprised of guitarist Rick Zehringer, his brother Randy on drums and bass player Dennis Kelly. Starting out as Rick And The Raiders, then The Rick Z Combo, the group later added organist Ronnie Brandon, becoming The McCoys soon after Randy Hobbs replaced the college-bound Dennis Kelly. The quartet became a highly popular attraction throughout America's Midwest and gained the attention of producers Feldman/Gottherer/Goldstein who brought them to Bert Berns' Bang Records. The group's very first release was a simple, hard driving tune called "Hang On Sloopy", which shot to the top of the U.S. charts and reached the Top 5 in the UK in the Summer of 1965. For a follow-up, the band chose a similar arrangement for a tune called "Fever", a remake of Peggy Lee's 1958 Top Ten hit. A series of successive releases in a similar gutsy style fared less well. "Up And Dow" stalled at #46 in March, 1966 before a cover of Ritchie Valens' "C'Mon Let's Go" made it to #22 in early June. That would prove to be the band's final appearance on the Billboard Top 40, as the next release, "(You Make Me Feel) So Good" quit climbing at #74 in July and "Don't Worry Mother. Your Son's Heart Is Pure" topped out at #92 in October. 1967's "I Got To Go Back (And Watch That Little Girl Dance" could only get to #92 in early January and "Beat The Clock" just managed to crack the Hot 100 when it charted at #99 in mid-May. After one final release on Bang Records, "Say Those Magic Words", which failed to chart, the band was dropped from the roster.
Looking for greater artistic freedom, the McCoys signed a two-album deal with Mercury Records in 1968. Their first LP, Infinite McCoys, proved their most adventurous outing to date. Produced by Derringer and featuring the Blood, Sweat and Tears brass section, it tackled the psychedelic trend of the day. Derringer's guitar work was brilliant and expressionistic, but hit records were still the name of the game, and only "Jesse Brady" scraped the bottom of the charts. With the landscape of pop music changing rapidly and the group no longer in demand for high profile tours, the McCoys became the resident band at Steve Paul's Scene in New York City. During that time they released their second Mercury album, Human Ball. More eclectic and jazz-based than the first, it featured frequent interplay between guitar and keyboards, and lengthy Hendrix-inspired jams by Derringer. Yet like its predecessor, it couldn't find an audience, and the McCoys were looking for meaningful work for the first time since their high school days.
After keyboardist Peterson departed, help came in the form of albino blues-rock legend Johnny Winter. Nightclub owner Steve Paul, who also managed Winter, put the two acts together when Winter needed a backing band. Playing with taste and fire, the group collaborated on 1970's Johnny Winter And, a title that left the McCoys apparently uncredited. The band played behind Winter in various configurations, both live and on four albums, but in 1973 the McCoys unofficially drifted apart. Various incarnations would pop up as a country bar band and an oldies act in the decades to follow, but they would no longer reach the commercial heights of their 1960s work or the artistic integrity of their 1970s backing sessions.
It was another story for Derringer, who joined Edgar Winter's White Trash and produced his number one hit "Frankenstein." "I always enjoyed working with Rick in whatever band it was," Edgar Winter told Dan Muise in Gallagher, Marriott, Derringer, and Trower: Their Lives and Music. "I thought he was great in White Trash.. . . A great strength of his is his versatility." Touring with Winter and cutting records on his own, Derringer emerged as one of the 1970s' finest lead guitarists, who played with skill and abandon. He was able to blend a solid career as a solo artist---launched with the1973 top 20 hit "Rock 'n' Roll Hootchie Koo"---with that of a successful producer and session player. He produced five of song parodist Weird Al Yankovic's most popular albums, effortlessly allowing the comedian to ape any pop or rock style he chose. He has continued to play live show dates, seldom straying very far from his roots. When the mood strikes him right, he'll play a monster rendition of "Hang On Sloopy," the song that first brought him fame.
by Ken Burke 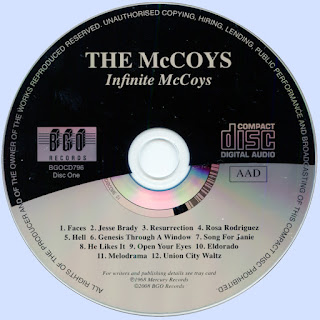 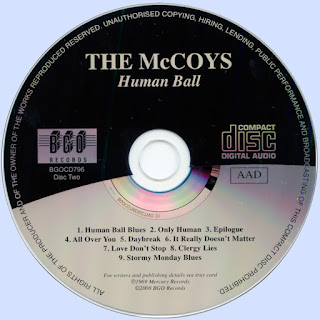