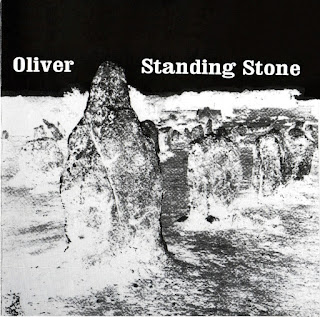 Part time farmhand, spare time guitarist and lull time Robert Johnson enthusiast Oliver recorded Standing Stone in early 1974 on a portable tour track Teat machine on his parents' farm in a particularly remote area of Wales. Aside from a few unscheduled interventions from farmyard creatures(inspiring the adlibbed line 'What's this chicken doing in my way?' on 'freezing Cold Like An Iceberg'), all sounds contained on the album are the sole* work of Oliver. His brother Chris, a BBC sound engineer who had worked on I he Corporation's legendary Hendrix sessions as well as countless other projects, subsequently mixed and engineered the raw material to give Standing Stone a sound quality and running time (in excess of fifty minutes) that even that ultimate studio whizzkid Todd Rundgren would have envied 250 copies were pressed, initially in a plain blue cover with black lettering. However, when the sleeves were returned from the printer it was discovered that the shade of blue utilized was so deep that the liner notes were barely legible. A garish olive green version, easier to read but not recommended to migraine sufferers, was quickly substituted.

Copies of Standing Stone were given to family and friends, but Chris passed a few to colleagues at the BBC including Radio One disc jockeys Brian Matthew and Alan Black, who at the time was co-hosting 'Sounds Of The Seventies' with Anne Nightingale. Black was keen to feature the album on his show but felt unable to do so without any product being available in the shops. A distribution deal with Virgin (at that stage principally a record shop rather than a label) was therefore mooted, but a combination of inhouse reorganisation at the BBC and Oliver's reluctance to lose control of his creation ensured that the proposed agreement did not get beyond the planning stage.

Standing Stone also brought Oliver to the attention of guitarist and songwriter J. J. Cale, and he was invited to jam with Cale during one or the American's infrequent visits to England. Despite similar sessions with prominent underground figures of the era, Oliver remained deeply suspicious of the music industry and unimpressed by the life-styles of the musicians he encountered. Instead of capitalizing on the interest show?) in Standing Stone, he decided to leave Wales and travel around Europe. By the time he returned, the album had been largely forgotten.

Most collectors will be familiar with the rest of the story. Standing Stone remained strictly personal until the late 1980s when a slightly battered copy surfaced at a car boot fair and was swiftly transferred to the burgeoning collectors circuit. Such was the demand created by the appearance of this single copy that Oliver was contacted and found to have a handful of originals still in his possession. These rapidly changed hands for ever-increasing sums as word got around that here was one of the great lost albums, a stunning cacophonous sound occasionally evoking Captain Beefheart and the aforementioned Robert Johnson, but boasting such a startling blend of originality, dexterity, wit and downright weirdness that influences were not merely transcended but rendered completely irrelevant (in fact Oliver claims not to have purchased his first record until 1991, nearly two decades after Standing Stone had been recorded).

Following the rapturous reviews which greeted the appearance of a limited edition vinyl reissue in 1992, Standing Stone is finally available in CD format in order to appease those unfortunate souls unable to locate either an original or second pressing. A series of equally astonishing outtakes will hopefully appear in the near future; meanwhile, proof of Oliver's maverick genius is now widely available for the first time as the newly formed Wooden Hill label proudly presents Standing Stone — not so much a missing link as a dropped stitch in time.
by David Wells, June 1995 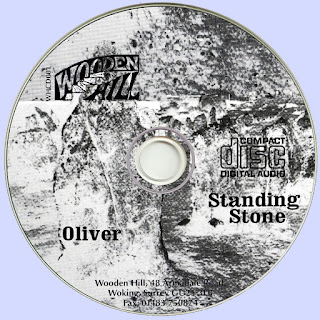