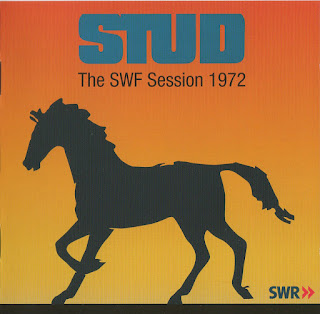 When Jim Cregan, Richard Mc Cracken and John Wilson got together in the fall of 1970 to form Stud, British music magazines ought to have hailed the advent of a super group. After all, bassist Mc Cracken and drummer Wilson were the rhythm group of Rory Gallagher’s first class band Taste, and Jim Cregan was one of two guitarists of Blossom Toes, a band generally esteemed for its high musical potential. But the band’s take off was scarcely noticed by British music magazines, as was the release of their first album in April 1971, in spite of the many positive reviews they received. This is why the band never made it beyond the status of an insider’s tip in Great Britain. However, in Germany Stud was a very popular live act; they played on many large festivals and toured the German clubs, which helped spur the sales of their first album and made for a reasonable living. Stud, and particularly manager and producer Eddie Kennedy, blamed the local record company Decca for the lack of success in the UK and demanded a better marketing. The dispute left Stud without a record company.

The band saw their chance in Germany, where they were successful and had many fans due to their frequent gigs. In 1970, BASF, originally known as a label for classic and jazz and as manufacturer of audio and cassette tapes, had established a rock label of the same name ( as well as the sub label Pilz), and gave Stud a contract. After the release of their first album, John Weider (guitar, violin, piano, vocals) joined Stud as a permanent member. He had already played as guest musician on the first album. The albums “September”, released in early 1972, and “Goodbye, Live at Command” were recorded with the participation of Weider. When “Goodbye..” was released in the summer of 1973 – the recordings had been done live during a session in London’s Command Studios in May 1972 – Stud had ceased to exist. Cracken had been the first to leave the band to join the newly formed Spencer Davis Group. John Weider had formed Moonrider, together with Keith West, and Jim Cregan had joined Family and played on their last album “It’s only a movie”.

The band was retired for good when John Wilson’s attempt to carry on Stud with former East of Eden bassist Andrew Sneddon and guitarist Snowie White failed. Even though Stud was perhaps no more than a footnote in the history of British rock music and was never as important as the bands its members had played in before, the group is still very popular with music lovers. These recordings made in the SWF studio U1 represent a cross section of all three studio albums and are an impressive prove of the band’s musical bandwidth and the band members’ excellent technical skills.
by Manfred Steinheuer, August 2009 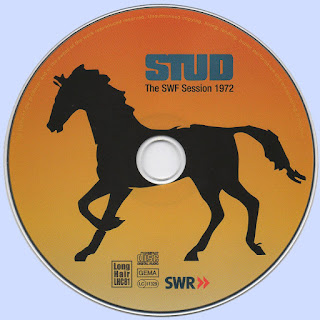 Free Text
the Free Text
Posted by Marios at 10:31 AM 2 comments: