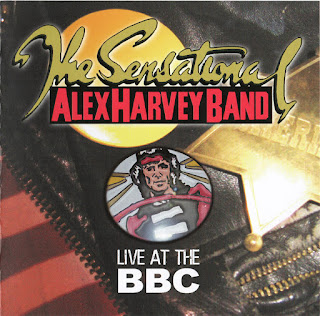 Two discs of 1972-1977 BBC performances by the Sensational Alex Harvey Band with excellent sound are collected on this set, though it's not quite as lengthy as you might assume, adding up to about an hour and a half in all (with only about half an hour on the second disc). There aren't great surprises in store for those familiar with Harvey's BBC work during this, his commercial peak. As was also true of his records, his reputation as a truly sensational live visual performer isn't quite mirrored by this audio-only document. Too, the only song that doesn't appear on his studio releases of this time is a 1972 cover of "Dance to the Music," which might be energetic but certainly wouldn't give Sly & the Family Stone cause to worry.
Disc one is entirely devoted to two performances at BBC's Paris Theatre, one in November 1972 and the other in October 1973, where they run through the bulk of the material from the SAHB's first couple albums. Some of his most celebrated songs, like "Framed" and "The Faith Healer," are naturally included, as well as his oddball cover of the early rock & roll hit "Giddy Up a Ding Dong," though Harvey's manic-tinged vocals are more impressive than the period hard rock backing.
Disc two actually features 1973-1975 performances from the BBC television shows The Old Grey Whistle Test and Top of the Pops rather than radio spots, and the two songs from a December 1973 OGWT appearance -- an anguished cover of Jacques Brel's infamous "Next" and a second version of "The Faith Healer" that utterly outclasses the one on the first disc from just two months earlier -- are the highlights of the collection, though this "The Faith Healer" is actually a live Harvey vocal fronting a pre-recorded backing track. His 1975 U.K. Top Ten hit "Delilah" (from a 1975 OGWT broadcast) is another highlight, but take note that the final and least essential two tracks, from a 1977 appearance on the same program, are the SAHB without Harvey.
by Richie Unterberger 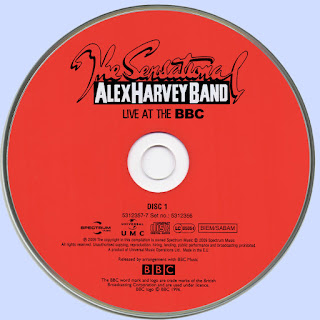 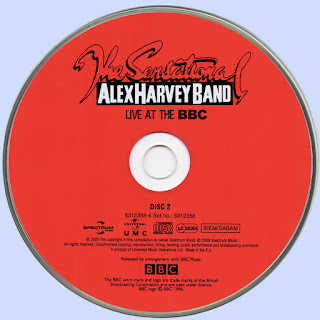 Free Text
Text Host
Posted by Marios at 6:32 AM No comments: