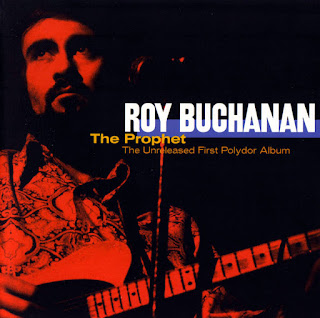 In 1969 -- some three years before his self-titled debut solidified his stature as a pre-eminent string bender -- Roy Buchanan (guitar/vocals) signed with Polydor Records and began work on his first full-length platter. In 2004, three-and-a-half decades later, the audio archivists at Hip-O Select finally issued The Prophet: The Unreleased First Polydor Album (2004). Augmenting the 11-track running order that would have made up that disc, the single-CD package contains 30-plus minutes of previously vaulted outtakes, including tunes documented at an aborted March of 1971 session.

Prior to garnering notoriety as "The World's Greatest Unknown Guitarist," Buchanan spent the '50s and early '60s as a support musician for a number of R&B outfits and served stints in both Dale Hawkins' and his Canadian cousin Ronnie Hawkins' respective combos. It was during a period that was marked by touring with the former that he first came to the attention of another rising performer named Charlie Daniels. By the late '60s the two crossed paths professionally as Buchanan was placed in the care of Daniels, whose recent roster boasted production credits for the likes of Bob Dylan and Leonard Cohen.

Because of Buchanan's reluctance to travel away from his regular club gigs in and around the Baltimore, MD/Washington D.C. area, Daniels was only able to corral him long enough for a handful of studio dates in Nashville, Tennessee. Accompanying Daniels (guitar/vocals/harmonica) and Buchanan are Bob Wilson (keyboards), Karl Himmel (drums), Ernie Winfrey (timpani/percussion), future Charlie Daniels Band mainstay Joel "Taz" DiGregorio (vocals), as well as Crosby, Stills, Nash & Young associate Tim Drummond (bass). Although four of the songs surfaced on the excellent career retrospective Sweet Dreams: The Anthology (1992), when restored to the original lineup they are given additional context, further demonstrating the breadth of Buchanan's chops. Of those making their incipient showing here, highlights include the heavy "Funky Junky," as it packs a punch that lies between Derek & the Dominoes à la "Got to Get Better in a Little While" and harder rocking units such as the Joe Walsh (guitar/vocals) era James Gang.

"Day and Age" propels forward with a double-time rhythm, while the tune "Billie Joe Young" resumes the exploration of the guitarist's penchant for jazzier improvisations. There are also some great licks on "Pain" and the dark and edgy "I Desire You." However, it is the initially discarded reworking of T-Bone Walker's "Stormy Monday" and the all too brief "Jam" that may command listeners primary attention. The March of 1971 batch is worthy of equal (if not perhaps more) consideration as Buchanan emerges out from under Daniels' care as a masterful leader. "Roy's Bluz" burns with a simmering and scintillating groove, while the cover of Junior Walker's "Shotgun" immediately lays down the law with Buchanan's blistering opening flurry.

The medley pairing "After Hours" with "The Messiah Will Come Again" arguably outshines the two respective versions that subsequently appeared on the imaginatively titled Roy Buchanan (1972) and Second Album (1973). Those enthusiasts who thought they knew Buchanan's legacy will be nothing short of ecstatic to supplement what is quite possibly the single most crucial entry in his posthumous catalog.
by Lindsay Planer 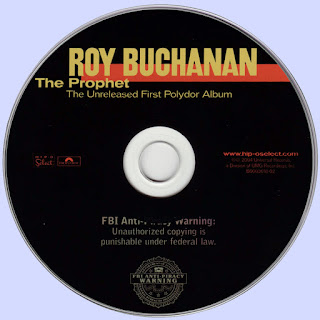 Free Text
the Free Text
Posted by Marios at 10:00 AM 3 comments: