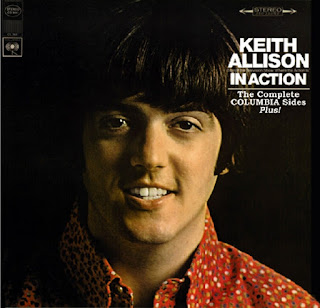 Keith Allison is a talented guy who has worked with some of the biggest names in rock 'n' roll, but he owes his solo career to simple good luck. In 1965, Texas-born Allison was at the Whisky A Go Go in Los Angeles hoping to get paid for a demo session he played on for Tommy Boyce and Bobby Hart when someone spotted him and thought he'd look good on television. That of all things led to a regular gig on ABC-TV's rock music show Where the Action Is! and a record deal with Columbia. In Action: The Complete Columbia Sides Plus! features Allison's 1967 album In Action in its entirety, along with 12 bonus tracks from singles he cut for Columbia and Amy Records between 1966 and 1970. Allison was a fine singer, a solid guitarist, and a gifted songwriter, but he doesn't get much of a chance to show off the latter on his album; while he penned one of the best of its 11 songs, "Freeborn Man," in tandem with Mark Lindsay () - it's a country-flavored tune good enough that Bill Monroe and Jimmy Martin both recorded it, the rest are covers that offer up a cross section of what was happening in pop at the time -- two Monkees covers, two Donovan tunes, several numbers about cars and girls, and a smattering of well-scrubbed R&B for seasoning.
The arrangements are sharp and Allison's voice is clear and versatile, with his faint Texas accent adding a nice twist to the songs. However, it's the single sides that feature the most interesting material () - all in punchy mono that sounds tighter than the more spacious stereo mixes on the album; "Glitter and Gold" and "I Ain't Blamin' You" are teen pop with some real grit, "Look at Me" and "Everybody" give Allison room to show off his songwriting chops, and "Who Do You Love" and a medley of "Johnny B. Goode" and "Whole Lotta Shakin' Goin' On" demonstrate he had a firm command of rock & roll basics. A year after In Action was released, Allison joined Paul Revere & the Raiders, and since then he's worked with everyone from Harry Nilsson to Alice Cooper, but this disc shows Allison clearly had the goods for a solo career, even if his sales figures suggested otherwise.
by Mark Deming
Keith Allison took listeners “where the action is” on his 1967 Columbia Records debut LP In Action, packing its grooves with tunes from Tommy Boyce and Bobby Hart () - including “Action, Action, Action,” the theme to ABC-TV’s Where the Action Is, which featured Allison, Donovan, Neil Diamond, Ray Charles, and his future bandmates Paul Revere and the Raiders. On the album—produced by California music icon Gary Usher—Allison even introduced a future country-and-western staple in his own song “Freeborn Man,” co-written with the Raiders’ Mark Lindsay.  Real Gone Music’s first-ever compact disc reissue offers more action than before, adding twelve original mono single bonus tracks to the original eleven stereo pop nuggets.
These diverse 45s—ten rarities from the Columbia vaults and two ultra-rare tracks from Bell Records’ Amy imprint—boast productions by the likes of Mark Lindsay, Terry Melcher and Larry Marks, and songs by Bo Diddley, Joe South, Tommy Roe, Chuck Berry, Jerry Lee Lewis and the legendary Brill Building team of Barry Mann and Cynthia Weil as well as Allison himself.  Like "Freeborn Man," a couple of these tracks () - South’s “Birds of a Feather” and Allison and Lindsay’s “Wednesday’s Child" would also get the full Raiders treatment on the band’s albums.  Taken together, the 23 tracks on In Action—The Complete Columbia Sides and More! show the many sides of this singer, songwriter and multi-instrumentalist who, besides being  the late-period Raiders bassist, worked with the Monkees, Ringo Starr and Alice Cooper. Joe Marchese’s in-depth liner notes explore the Keith Allison legacy; Vic Anesini’s remastering lets the music shine. 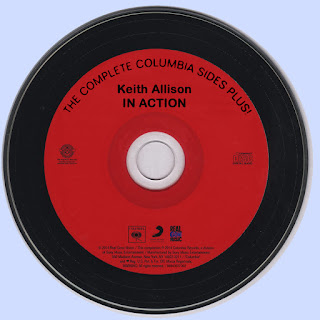