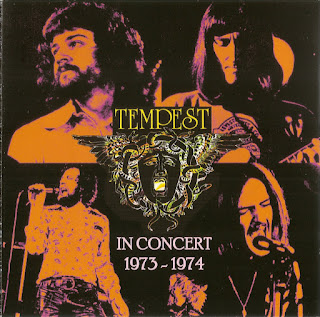 Tempest will. From a four piece, to a five piece, the band name aptly describes their music, and has always been the basis of their style. With Hiseman, the Thunderous God of Percussion, the musical elements ebb and flow like a storm, or a rock translation of Wagner. Thus, the overall feel is one of adventure, turbulence and down the line funk.

Naturally by trimming the group format they operate with more advantages, and conversely more limitations.

Halsall, the ex-Patto axe-man, has the scope to improvise licks continually, with Clarke using an equal amount of imagination. So the front two provide an enormous dose of entertaining playing.

And although Hiseman plays with true excellence throughout the set, at times he does have to restrict himself to strict rhythms and tempos.

But his solo, towards the end of the concert, was one of the highlights.

Visually too the band are impressive, with some good lighting effects, and Clarke bent over his instrument, his hair bursting from his skull, as if somebody had put a hatchet right down the middle. And of course Hiseman demonstrates the ancient art of stick juggling.
by Tony Stewart, from NME October 13, 1973

At the moment Tempest are creating more of a commotion in Europe than in England, to quote Jon Hiseman they are somewhat forgotten here. In an attempt to correct this these patriotic lads are currently undertaking a few dates in their Mother land before hot footing it back to the Continent. On Saturday they played at the Belfry near Sutton Coldfield deep in the heart of the green and pleasant land of Warwickshire and showed that they deserved to be thought of more often, more highly by more people.

The start of their set concerned my original opinion of Tempest that although their individual and collective musical ability was not in doubt they seemed to be falling between two stalls. They were neither an out and out instrumental group nor was their music following the more simplistic pattern of vocally orientated numbers.

However this doubt was soon removed as later numbers varied in pace and the vocals served as a focus rather than a limitation for some intricate instrumentalisation. Particularly successful was "Living In Fear", a blues gone wild that showed the dual talents of Ollie Halsall on guitar and moog, and contained some very effective bass runs by Mark Clarke; "Dream Train" with some slow harmonics; and "Stranger" which emphasised what a superb technician Jon Hiseman is.

The crowd warmed to the group and the night was rounded off with a rousing version of "Paperback Writer".
by Phil Holt, from Sounds, May 4, 1974 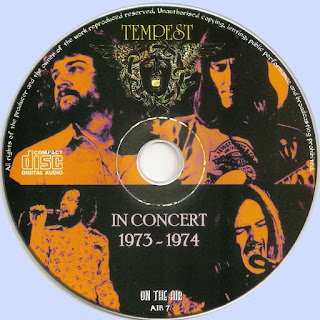 Free Text
Text Host
Posted by Marios at 11:41 AM 2 comments: