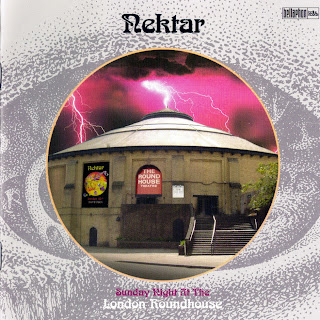 Releasing a live LP with side A containing one and a half song from a recorded concert and side B containing three cuts from a jam that lasted several hours was not a very sensible thing to do in 1974. The LP was titled Sunday Night At London Roundhouse, and its release looked somewhat overdone between the steady flow of album releases the band had anyway in those days (ten sides of vinyl in three years). I never though it was a very good album; it was too short. Too short for a live album, and too short to show anything that the band could do when jamming.

Nektar recorded their last date on the English 1973 tour (in support of their early 1973 album ...Sounds Like This, although the masterpiece that was following it, Remember The Future, was released two days before this concert took place) on November 25th, because the record company wanted a live album. Good idea, why not, although the band were more into their next studio album, of course.

Early the following year, while recording the following studio album Down To Earth, the bass player's birthday was a reason to go jamming for a few hours having the tape recorded running - it was March 27th, 1974. A good reason! Besides the opener Desolation Valley, many of the music that followed was pure improvisation or at least unreleased material. And sometimes very unlike their usual sound.

With recordings like that I could never imagine how a record company could take only two songs from the live concert for one side of a live album (Desolation Valley and A Day In The Life Of A Preacher including the birth of Oh Willie, the latter was even cut in half for the release) and making a very short B side with Oops - Unidentified Flying Abstract, Mundetango, and Summer Breeze from the jam session. I once wrote that the only reasonable thing the record company could do is release a double CD of the full concert and if necessary a multi CD set of the jam.

Well, what do you know? They did almost exactly that! First, there is a double CD featuring the complete concert in wonderful stereo quality. Crying In The Dark / King Of Twilight is good, great to hear Cast Your Fate and especially Odyssey of which I knew only one other live version. Remember The Future and 1-2-3-4 are wonderful. A Day In The Life Of A Preacher is at last complete, and a special version indeed as it has the origins of what would become Oh Willie on the following studio album Down To Earth. It shows how the band could jam while in concert, it shows how tight the unit of these musicians was, and it shows the diversity in their musical ideas. With the following jam, titled Summer Breeze, the sound is going from dreamy to heavy agressive. I have always loved this contrast in the band's sound.

The album also shows that after ...Sounds Like This and Remember The Future, the band was letting in the guitar more and more, a little away from the somewhat psychedelic sounds of the first album and the title track of A Tab In The Ocean, though still being progressive. Well, with Down To Earth coming on, this is hardly a surprise. Playing A Tab In The Ocean live in 1976, it was like the band was saying they never stopped liking their earlier sound, but they were just exploring further. (It is beyond the scope of this review to go into the sound of the album after that, Recycled, but on there, the keyboards regained importance.)

Being more of a progressive rock fan than a rock and roll fan, the rock and roll medley show closer is less interesting, but what's 6 minutes on a 100 minute show, eh? But also being a fan of early blues and hard rock, songs like 1-2-3-4 and Odyssey are just marvellous! The emotion that is feeding the musicians results in such performances that is best heard live. With the band having reformed, I am very much looking forward to seeing them on stage!

The other side of the original Sunday Night LP received the same "and now a proper CD release" treatment, resulting in a 41 minute disc. Significantly more than the 15 minutes on the LP. I guess these are the parts from the jam that were worth a commercial release. I am still curious to what the rest of the tapes hold secret, but I am more than satisfied with what is offered here.

It is starting with a song we all know, but you can hear and feel the band is more relaxed than in front of an audience. You can hear it on other recordings as well, but not as clear as here, how subtle a guitar player Roye Albrighton is.

The other tracks are all otherwise unreleased. One Mile Red and Summer Breeze were played in concert several times, though. The first definitely bears the Nektar signature on it. But the remaining tracks all have something surprising, making this release a very special one. Being in a relaxed environment obviously lets the musicians play looser tracks, almost jazzy as in We Must Have Been Smashed or Oops, although the latter was not that laid back.

These CDs are a real treat for Nektar fans! Fans will have it already, it's not for them I write this. If you like Nektar and would like to hear how they sound live, get this Sunday Night album right away! Unidentified Flying Abstract is amazing for fans, but there are other albums to hear first if you want to get to know the band.
by Gert Hulshof 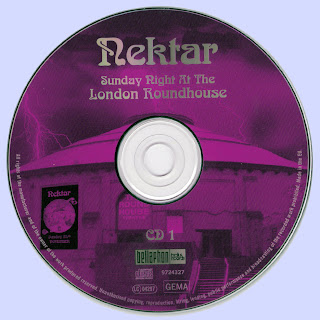 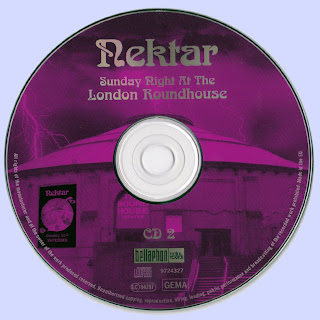 Free Text
Just Paste
Posted by Marios at 11:47 AM 8 comments: