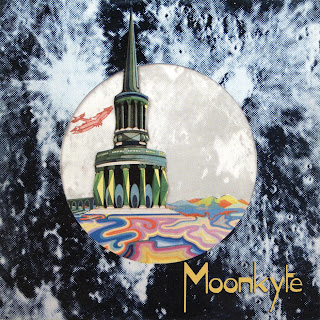 The story of Moonkyte could well be described as an acid-fuelled accident just waiting to happen or even a short career of ill-repute for those with affliction.

The tale begins in Bradford, West Yorkshire, where Dave Stansfield managed a host of local bands. A favourite was blues band The Broomdusters. Local venues were loathe to embrace the blues in 1967 so, with his dear wife Chris, he opened a pub-based blues club just so the band could get a hearing.

It was then that Dave Foster strutted into the picture. He was younger than Stansfield but was sharp and had a natural wit. He was a guitarist and harp player who'd been in a band with Richard Treece. Treece later found fame (or infamy) with Help Yourself, Deke Leonard and Man. Foster was a blues kid who developed into a blues man and an acknowledged expert in the genre. Stansfield offered him a job at £1.50 a week plus a percentage of takings at two new clubs in Leeds and Ilkley.

Stansfield had been a full-time singer in bands in the early 1960s' and had always loved to write. He suggested that he and Foster should write some songs together. Their writing laboratory was Druid's Alter, a large rock that overlooked Yorkshire's Aire Valley. it was there that they began to indulge in regular un-holy communion with the celestial deities of sacramental substances.

Mischief then appeared in the form of Dave Ambler, a whistle, banjo and sitar player, who had access to copious amounts of pure microdot mayhem. Wholesome doses were devoured with great gusto and relish. They were on a mission. They believed that they were serious spiritual space  explorers probing and travelling far. They didn't even fasten their safety harnesses. Perhaps they should have.

The three then transferred their ideas to tape at a small, local two track studio. The owner was somewhat apprehensive but persevered with an admirable sense of grace and dignity. With some tracks recorded that was it; or so they thought.

Fresh Garbage, a band that Stansfield was managing, won a competition for studio time in London's Regent's Sound Studios with eventual Moonkyte 'producer' James Spencely. He thought they were utterly useless but Stansfield slipped him a tape of the songs recorded by the "three musketeers" and suggested he get in touch if he liked it.

A couple of weeks later Spencely called Stansfield and asked if his band was gigging. "Our band", thought Stansfield. "What band?" With a smooth, slippery and silver tongue he lied to Spencely that they could hardly keep up with the demand for gigs and were going down a storm wherever they played. Lo and behold James invited the (non-existent) band to record some songs in his Denmark Street studio.

Budding space cadet Mick Humphreys was quickly drafted in on drums as well as seasoned musician Trevor Craven on bass. They honed a bunch of songs with a blunt knife and tripped off to London where they laid down all the tracks for 'Count Me Out' in a couple of days. It was pure psychedelic fun. An assortment of wizards, witches and total strangers turned up to contribute to an atmosphere of serene madness.

James Spencely was bemused and sometimes a little frightened. Stansfield, with the help of Foster, had worked out all the arrangements and effects but they were not involved in the final mix or editing. When listening to the finished product it became obvious that James had become somewhat unhinged by the whole excperience. He'd even drafted in the lead singer of The Fortunes to try to give some sense of earthly structure to a few harmonies.

'Count Me Out' was released in 1971 on the Mother label and was distributed by EMI. Unknown to the band BBC radio DJ Emperor Rosko was the label owner. Some have said that he was trying to jump on a John Peel bandwagon but if he was he failed miserably. John Peel, however, did write the extensive sleevenotes. He had a love of the North of England, particularly as his wife came from Shipley in West Yorkshire. The lovely, and sadly missed, man played the occasional Moonkyte track on radio. He even played tracks by other bands for Stansfield's daughter Emma.

Moonkyte didn't gig much following the release of Count Me Out. They sullied a few stages at open air festivals with their acoustic debauchery and headlined a few other indoor gigs. Not a good idea. Holding it all together onstage was not their speciality.

It's hard to define Moonkyte music. It's often described as Acid-Folk or Psychedelic Folk but their influences were many. As Dave Foster comments. "At the time of the first LP all our influences were in place and jumbled up. They were packed away in our subconscious. A Pandora's Box was opened up with our pscychedelic experiences in a two track studio in Shipley. Both Stansfield and I were influenced by Black music and it shows on Count Me Out. There's a Delta slide on Blues For Boadicea for example and a lot of vocal links were cry and holler.The harmonium was also very churchy."
by Sturton Herbsmann

This album, as a whole, is pretty damn good, and contains extraordinary moments. It's actually much better than many of the more recent rare-folk 'discoveries' that I have heard. It is, undoubtedly, tripped out. It was recorded and released in 1971 and even caught the attention of John Peel, who penned the original liner notes. Count Me Out is no exercise in mediocrity. It is heavily steeped in the gloriously drugged psychedelic folk scene of the time, along with some mild doses of rock awareness. There are dreamy backing vocals, occasionally devilish beats and rollicking, almost swanky, electric bass lines throughout.

The album is, all in all, a strong effort, one much deserving of attention. Case in point: 'Girl Who Came Out of My Head', a song so good that I am amazed it has not popped up elsewhere (to my knowledge). This cut is the finest cohesion of what Moonkyte offers. All of the elements that are present over the course of the entire album are fully realized here. Between the swaying harmonium, rich, multi-tracked backing vocals and a striking, ethereal sounding female vocal making a brief appearance, we have a diamond here. Worth the price of admission alone. Luckily, you get more.

The opening track, 'Search' gets the whole album off to a jumpstart. The harmonium and the backing vocals and the swinging bass line announce the tweaked-out trip you are in for. The album is, all in all, a strong effort, one much deserving of attention. The wider discovery and availability of this Moonkyte album stands as a prime example of what good may still exist hidden out there, and reason enough to cautiously continue down the road with further psych-folk re-issues.
by Adam Richards 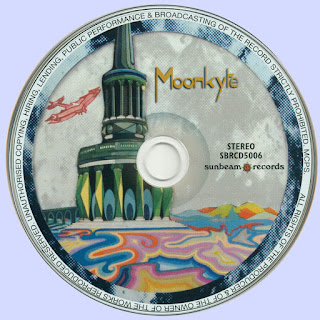