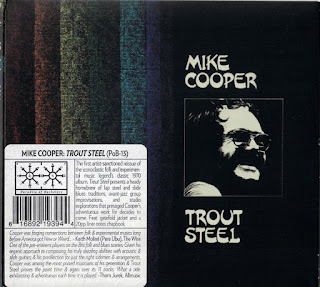 Mike Cooper was already a noted multi-instrumental folk and blues guitarist who rejected pigeonholes for a more enlightened view of the musical community when, in 1970, Pye released his third album, Trout Steel. It can be argued that Trout Steel became the fulcrum upon which the rest of his life made purchase, marking the point at which his style openly balanced traditional arrangements and song structures with the organic and experimental movements at the periphery of folk, jazz and blues.

Employing acoustic, resonator and lap steel guitars, piano, upright bass, saxophone and all manner of percussion, Cooper set out to blend his interests across the length of an album that, 43 years on, is now afforded a re-issue through Paradise of Bachelors. Cooper has gone on to record albums, score orchestral soundtracks, make films and generally engage in any output of ethnic and acoustic noise art that will expand his, and our, experience of sound. In 1970, you can hear the seeds being sown.

Of the more traditional arrangements, That’s How, the opening track, is as close as you’ll get to understanding his mindset as the new decade began. The first of many tracks to remark upon the need to keep moving and seek out new horizons, it has a simple chord strum that introduces his reedy English vowels:

So hard, to know what she’s thinking / So hard to know, what’s on her mind / Everything has changed and everyone’s to blame / For the things, that get lost, on the way

It’s as English as scrumpy and ploughmans. Sitting Here Watching is a blues twang with pre-cursive hints of Neil Young’s Harvest, whose 1972 released songs adopt a similar loose-limbed vocal performance and ragged guitar accompaniment. Goodtimes and Hope You See could be outtakes from the Let It Be sessions, the latter complete with a ‘Sorry Ringo, it’s not good enough to make the cut’ country warble over the layered guitar parts. Don’t Talk Too Fast has a great melody and a fiery sax break. They’re all good.

If these and the remainder of the album were all you got, Trout Steel would be an album you’d be pleased to sit beside your early Richard Thompson or Nick Drake vinyl. What marks it out is the tracks that don’t conform to our standard expectations. Four tracks in, I’ve Got Mine sets up a repetitive guitar riff that for four minutes is overlaid with splashes of piano, dissonant brass breaks, random percussive outbursts and the occasional bar of a violin seemingly tuning up.

At first it’s purposefully disconcerting, but as the guitar builds the melting pot of instruments come together as if until now they’ve just been playing with you, allowing Cooper to sing over the slightly more accommodating middle of the song. The extended jam and free-form nature of the track bookends the vocal part and the whole runs for nearly twelve minutes. Repeated listening begins to unfold the layers of melody until what seemed forced and difficult becomes natural and cohesive.

I’ve Got Mine is followed by A Half Sunday Homage to a Whole Leonardo da Vinci (without words by Richard Brautigan), a short jazzy instrumental that was clearly the influence for Fiona Apple’s album titles. The other departure is Pharaoh’s March, which expands upon I’ve Got Mine’s template by introducing ambient sounds, small bells and off-key string pushes that rise in volume and depth alongside scat-like saxophone and de-constructed beats to a crescendo that resolves in a melody that destroys itself before the end. Whilst it’s not a song you’d play for your Gran on a Sunday afternoon (or maybe you would?), its merit lies in the message Cooper was sending out, that he was more than ready to step off the yellow bricks and explore the fields to either side. As a calling card for his later work, in particular his last Pye releases Places I Know and The Machine Gun Co, it’s a perfect transitional piece for anyone tempted to join him.

Ironic then, that the final track, Weeping Rose, reverts to type with a gentle stroll through a folk-picker that stays in the memory long after it finishes, the method of delivery nothing new but the lyrics continuing to elucidate upon his wanderlust state of mind and need for pastures new:

So long girl, I’ve got to go / You won’t understand that I know / You take my hand, be my friend / I’ll meet you further down the road

The reissue has been handled with care and is available on vinyl or CD. It comes with the reassuring hiss of a master long tucked away before seeing the light of day, which doesn’t detract from the music, but helps to place it in its time even as the content seeks to make time immaterial. File under classic.
by Paul Woodgate 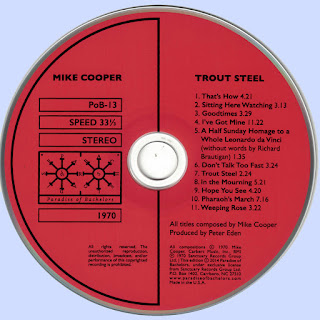