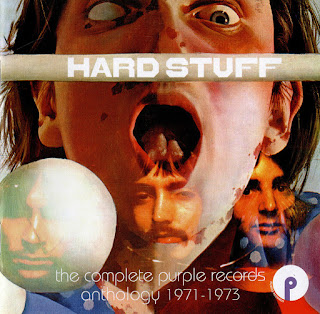 Hard Stuff came to life when the musical differences between guitarist/vocalist John DuCann and drummer Paul Hammond with keyboardist Vincent Crane reached a boiling point regarding the direction that Atomic Rooster would follow in the wake of their #4 UK hit “Devil’s Answer.” Crane wanted to follow a soulful direction while DuCann and Hammond favored a heavier rocking sound for the band. Quatermass bass guitarist/vocalist John Gustafson was asked by DuCann to join Atomic Rooster, and agreed, only to find that Crane owned the rights to the band’s name.

The trio, joined by vocalist Harry Shaw, formed a quartet taking the name Bullet. The band released a single, “Hobo” c/w “Sinister Minister.” The songs on the single rocked, but there was already an American band named Bullet who had a top 30 hit, and thus the quartet was forced to take a new name. Shaw left the band, the remaining trio selecting the name Hard Stuff, recorded two albums, “Bulletproof” and “Bolex Dementia” as well as two singles. All these tunes are included on The Complete Purple Records Anthology with both sides of the Bullet single added as bonus tracks. The Bullet sides were re-recorded by Hard Stuff and included on “Bulletproof.”

Hard Stuff’s debut LP “Bulletproof” is a fine piece of hard rock, a combination of tunes written by DuCann and Gustafson, who share lead vocals. The album opens with the fiery guitar driven “Jay Time,” a DuCann composition, which was first recorded by Bullet, then re-recorded by Hard Stuff and released as the a-side to their first single. “Sinister Minister” another hard driving rocker, written and sung by Gustafson, follows and was also released as the b-side of “Jay Time.” “Bulletproof” is full of heavy riffs and hard rocking numbers with Gustafson’s “No Witch At All” and DuCann’s ‘Time Gambler” being particular standouts. Of the album’s ten tracks, six are re-recordings of tunes by Bullet, one, “Monster In Paradise” co-written by Gustafson with Ian Gillan and Roger Glover of Deep Purple, label mates of Hard Stuff.

The band’s second and final album “Bolex Dementia” is another fine piece of hard rock, full of heavy riffs by DuCann and thundering bass by Gustafson. As with its predecessor the LP is a mix of tunes written by DuCann and Gustafson, each contributing five tracks to the album. The opening track “Roll A Rocket” penned by DuCann sets the stage with its heavy riff and gorgeous solo. The LPs lead vocals are split evenly between DuCann and Gustafson, with each singing their own compositions. Two non-LP sides, Gustafson’s “Inside Your Life” and DuCann’s “(It’s) How You Do It! Were released as a single supporting the album and are included as bonus tracks on this anthology.

The Complete Purple Recordings 1971-1973 marks the CD debut of the single sides by Bullet. An early mix of “Monster In Paradise” is also included as a bonus track. The sound quality of the recordings is the best yet, with DuCann, Gustafson and Hammond all participating in the remastering job. The set’s 16 page full-color booklet includes an informative essay by Malcolm Dome, as well as photos of the band members, album and single art work and a Hard Stuff/Bullet discography, making this the definitive Hard Stuff collection. Fans of hard rock and DuCann’s guitar work will definitely want this anthology to add to their collection.
by Kevin Rathert 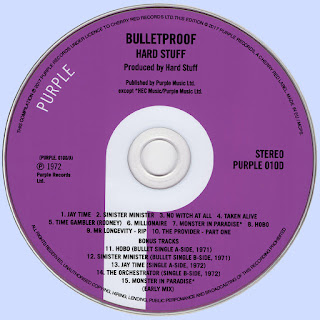 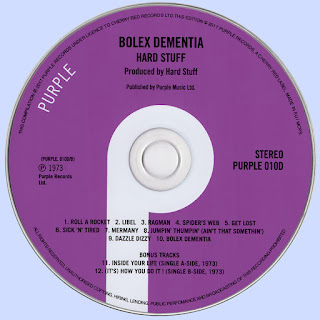