Jaime Brockett - Remember The Wind And The Rain (1968 us, splendid protest folk, 2005 remaster) 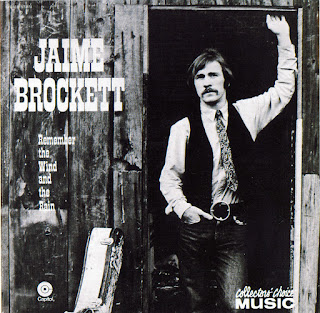 In the late 1960s, the exploding popularity of underground FM radio allowed for the broadcast of songs of a length that had been previously unimaginable in rock (and, for the most part, folk) music. Arlo Guthrie's 18-minute "Alice's Restaurant Massacree" (more popularly known simply as "Alice's Restaurant") may have been the most renowned of these, following a loose talking folk-blues format to relay an amusing shaggy dog of a tale. Somewhat less remembered, though likewise a big FM favorite in its time, is Jaime Brockett's 13-minute "Legend of the U.S.S. Titanic." Like "Alice's Restaurant," it too followed a talking folk-blues format, and also threw in knowing countercultural references, albeit with a mania that seemed like Brockett was going to jump right off the grooves and into a straitjacket. Unlike Guthrie, however, Brockett was unable to build upon his marathon monologue to sustain a long-running career as a recording artist. Indeed, "Legend of the U.S.S. Titanic" wasn't even too typical of his work, the rest of his debut album leaning toward introspective folk ballads. It was "Legend of the U.S.S. Titanic," however, that most listeners bought the LP for, and which would come to overshadow not only the rest of the album, but Brockett's entire career.

Brockett had achieved popularity on the Boston folk circuit before recording Remember the Wind and the Rain, which was initially issued on the small Oracle label before getting picked up by Capitol for wider distribution. It was a simple production, and a folk album, rather than a folk-rock one. The arrangements featured only Brockett's vocals, six-string guitar, twelve-string guitar, and dulcimer, though Tony Rubino added second guitar on "Remember the Wind and the Rain" and "Suzzane" [sic]. And although it was the dawn of the age of the singer-songwriter, Brockett in fact wrote just one and a half of the songs.

One of those songs, however, was "Legend of the U.S.S. Titanic." Brockett split the writing credit for that composition with fellow Boston folk-bluester Chris Smither, who went on to a long career himself -- in fact, he'd release many more albums than Brockett would, and though he never landed a popular success on the level of "Legend of the U.S.S. Titanic," he did reach the pop audience again when Bonnie Raitt covered his composition "I Feel the Same" for her 1973 album Takin' My Time. Relatively few listeners were aware that "Legend of the U.S.S. Titanic" was actually an updated mutation of a song that had been recorded by the great folk-bluesman Leadbelly, "The Titanic." In fact, Leadbelly remembered performing the song with fellow blues great Blind Lemon Jefferson in the streets of Dallas in 1912 -- shortly after the Titanic sank, and long before Leadbelly recorded it in late 1948, shortly before his death a little more than a year later.

As sung by Leadbelly, "The Titanic" was a relatively straightforward (and brief) tale of the ship going down in the Atlantic Ocean as the band played "Nearer My God to Thee." Also slipped in were couple of sly namechecks of the great African-American boxing champion Jack Johnson, with the ship's captain denying him passage at boarding. "Legend of the U.S.S. Titanic" kept some references to the sinking and Johnson, but otherwise took extreme, hilarious liberties with both the Leadbelly song and the actual Titanic saga. Brockett's crazed, largely speed-rapped version added a batch of wife-swapping Jewish passengers from Miami; an ominous declaration of intent by Johnson to watch the ship go down after being refused a place on board; and a hemp-smoking first mate whose funny cigarette, when shared with the captain, spaces them out enough to seal the disaster. It was a comic tour de force, though the marijuana toke and, more to the point, a very elongated utterance of a major profanity, helped ensure that the back cover marked the track with an asterisk cautioning "Audition Before Airplay." Not that it deterred too many FM jocks, judging from the number of listeners who remember hearing it on the radio in the late 1960s and early 1970s.

Tracked down by the Massachusetts paper the Worcester Telegram & Gazette in 1997, Brockett said the song demonstrated how "you should smoke [marijuana] in the privacy of your own house," not on the bow of a ship. "The song was sort of a metaphor for the sinking of Western civilization," he observed. "I embellished a lot of decadence on the boat. With the movie [Titanic] coming out, I've been getting all sorts of offers to record it again." The article also noted that Brockett was a member of the Titanic Historical Association and owner of a large collection of Titanic memorabilia, and keen to stress that the tale he spun in "The Legend of the U.S.S. Titanic" had no basis in actual historical fact.

There was just one other song on the LP, the opening "Talking Green Beret New Super Yellow Hydraulic Banana Teeny Bopper Blues" -- with its snipes at Spiro Agnew and pop music, and another upfront mention of dope smoking in the lyric -- that was anything remotely like the talkin' folk-blues of "Legend of the U.S.S. Titanic." (Ironically, considering how crucial FM airplay was to the success of "Legend of the U.S.S. Titanic," "Talking Green Beret" was dedicated to AM radio listeners.) Most of the rest of the album -- an extraordinarily long one for the vinyl era, incidentally, running about 55 minutes -- was given over to mellow folk ballads. Save for his co-credit on "Legend of the U.S.S. Titanic," the only Brockett original was the dulcimer-dominated instrumental "St. Botolph St. Grey Morning Dulcimer Thing." Including a phrase that came close to quoting verbatim from the melody of "Norwegian Wood," it was reminiscent of the similar pieces that had cropped up on Richard & Mimi Farina's albums a few years earlier. There was also a Bob Dylan cover, "One Too Many Mornings"; "Blue Chip," whose extended instrumental introduction very much recalled the tune the Blues Project used in their own instrumental intro to "Steve's Song"; and a closer, "Bag on the Table," that, when listened to closely, turned out to conclude with a rather grisly suicide narrative. Alas, it's likely that many of the album's purchasers rarely got that far, playing "Legend of the U.S.S. Titanic" (which led off side two) far more often than any other of its songs. With sales concentrated in the Northeast, the album, Brockett told the Worcester Telegram & Gazette, sold 100,000 copies.

"Legend of the U.S.S. Titanic" was a difficult act to follow, and Brockett did just one more album for Capitol (Jaime Brockett 2), also putting out an LP on Adelphi, North Mountain Velvet, in the mid-1970s. Perhaps it was difficult to give many listeners what they expected or wanted, "Legend of the U.S.S. Titanic" being a one-of-a-kind flash that was hard to repeat or follow up. "Unfortunately, Jaime Mellowed" ran the headline of a review of one of his 1973 shows in Concert magazine, which went on to complain, "Once a master of the sardonic comment, Brockett has mellowed, only occasionally revealing the bite of his sharp wit. The political songs and talking blues of the earlier days are also gone. His material now consists mostly of ballads, by other songwriters, that are pleasant but nondescript...It seems that Brockett is bored with playing his music, and he uses just about every distraction to avoid doing a song...The underground folk troubadour of the late sixties has not grown with the times."

When he spoke to Shaun Sutner of the Worcester Telegram & Gazette in 1997, Brockett was living in Vermont, acknowledging that his repeated performances of "The Legend of the U.S.S. Titanic" had been responsible for "what people say is the distinctive...gravelly voice I have today. I stopped doing it for a while. It was like 'Alice's Restaurant' for Arlo [Guthrie]. But I'm not complaining. A good song takes you a long way, and I probably wouldn't be working today if it wasn't for that song."
by Richie Unterberger 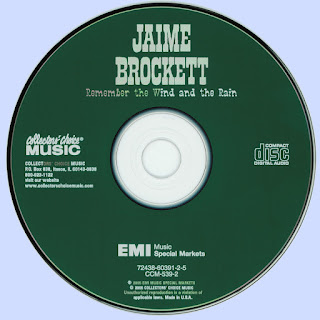