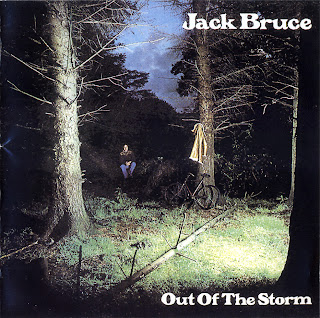 Out Of The Storm is Jack Bruce yet again taking a different path. No one can accuse this man of being redundant as he leaves behind the hard rock of Whatever Turns You On from his 1973 work with West, Bruce & Laing and takes on Steely Dan with a track like "Keep On Wondering."

The problem with West, Bruce & Laing is that they should have been the back-up band providing Jack Bruce the vehicle to express his artistry. "Keep It Down" would have been a tremendous track for WBL, and Lou Reed/Alice Cooper guitarist Steve Hunter provides the tasteful licks which Leslie West would've used a sledgehammer to find. The title track is real introspection with more "I" references than found on a page in a Marie Osmond autobiography.

Bruce uses the rock format to sing the poetry that he and long time collaborator Peter Brown have crafted here. When played next to his other albums, from Things We Like to Monkjack, as well as the aforementioned Leslie West collaborations, the indellible voice of Jack Bruce is found to belong, not to a chameleon, but to a true changeling. In an industry that resists change, his music evolves in relentless fashion, switching formats as efficiently and quickly as he switches record labels.

While Eric Clapton achieves the acclaim, it is Jack Bruce who delivers a novel and totally original title like "One" with a vocal that moves from cabaret to blues to soul. The man has one of the most powerful and identifiable rock & roll voices, and his body of work is overpowering. "One" has the drums of Jim Gordon and another venture into the Procul Harum sound Bruce has toyed with over various albums in different ways.

Out Of The Storm is another excellent chapter with Steve Hunter showing proficiency and remarkable restraint. Robin Trower, Mick Taylor, Leslie West, Eric Clapton and so many other guitar greats have put their sound next to Jack Bruce's voice, and this is Steve Hunter aiding and abetting, but not getting in the way of Bruce's creative pop/jazz.
by Joe Viglione 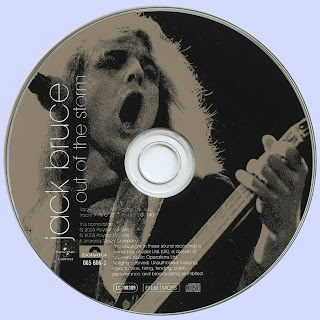 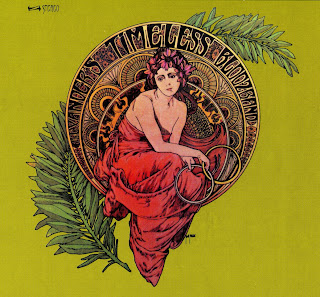 This is a very intriguing release from Alexander's (San Diego-Based) Timeless Bloozband.   I picked up the record on the basis that it was mentioned in one of the early issues of the pioneering rock mag "Crawdaddy!" and was immediately drawn in by the fantastic cover art.  Seriously, this has got to be one of my favorite record sleeves of all time.  Great colors and a wonderful image of the sad-eyed lady in the wicker chair with the band's name spelled out in psychedelic letters-- "timeless", indeed!
With such a welcoming image, surely the tunes inside had to great, right?

Well, the music here does start off in fine fashion with a hard blues titled "Love So Strong", which apparently was the single though I don't think it ever charted.  This winning number segues nicely into the album's real highlight, the jazzy "Horn Song", which musically is very much in line with what bands like The Electric Flag were doing at the time.  (We'll call it psychedelic jazz blues, for lack of a better term.)  The lyrics on this one are delivered at a rapid pace and contain a well-worded, anti-authoritarian message very much in line with the prevailing cynical mindset of your average 1968 street urchin.  A fantastic song that would make great fodder for any forward-thinking late-60's compilationist.

At this point upon first hearing I thought maybe I'd unearthed a genuine lost classic, but regrettably the quality of the songwriting does drop a notch or two from here on, though the musicianship remains fantastic throughout.  Instrumentally, their line-up consisted of a vocalist who I'm guessing also plays the blues harp and flute, lead guitar (very Mike Bloomfield-esque), electric piano, bass and drums.  As mentioned previously, tight musicianship is the order of the day, and the album sounds as if it was recorded live in the studio.

For a good summation of what the Bloozband were about, one could use the song "Swanannoa Tunnel" which takes the traditional blues form and re-works it into something quite new (for its time) via haunting wordless backing vocals and rapid-fire drumming.  There's even a bit of harp/ guitar duetting going on at the end here.  Songwise, "Swanannoa" definitely seems like it may have been the band's on-stage highlight.  Despite their moniker, the Bloozband were really better at this sort of psych/ jazz rock sound then they were at the straight blues stuff.

Much of the album's second side is unmemorable, though once again it bears mention that the playing here is quite fine.  The drummer in particular impresses, while the weak link remains the vocalist, who while adequate on the mellower stuff veers close to embarrassing on the trio of blues howlers-- "Rosie", "Darlin'" and "Help Me".

Overall my high expectations for this record were somewhat met, but in the end the experience was a little lacking.  Alexander's Timeless Bloozband were definitely a second-tier act in the face of such heavy competition as The Doors, Yardbirds or The Electric Flag (to name three bands similar in mood and approach).  Yet nevertheless they were still a crack band who contributed one stone cold classic to the pantheon in "Horn Song".  Therefore, I recommended For Sale to fans of the sixties' blues rock and psych, particularly if you can get the LP for cheap on the used market.
by Jasonbear ﻿ 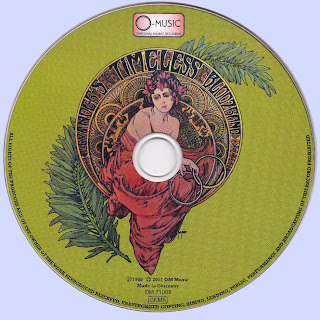 Free Text
Text Host
Posted by Marios at 9:09 AM 3 comments: