Country Joe And The Fish - Together (1968 us, classic west coast folk psych) 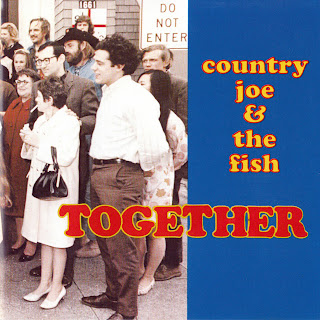 Recorded amidst growing personnel conflicts, 1968's "Together" came off as the band's first major misstep. Artistically disappointing, the big difference seemed to reflect the fact McDonald's creative presence was largely absent. Given he'd served as chief songwriter on the first two LPs, the impact was nothing less than profound. While competent songwriters, neither Melton nor Hirsch were capable of making up the creative shortfall. Sure, there were a couple of memorable numbers; the hysterical group-penned "Rock and Soul Music", the psych-influenced "Susan" and the blazing "The Streets of Your Town" (one of the toughest rockin' numbers they ever recorded), were all worth hearing.

This album doesn't have the stony vibes you can hear at the end of the first two. Well, really it's that it doesn't have the dizzying musical adjustments of "Colors For Susan" or "Section 43," there are pieces that are kind of like that, though they aren't as good. On Together, the band composes the pieces all together instead of having Country Joe do most of the work, so the vibe is uneven, punctuated by brainy moments here and there. "Rock And Soul Music" begins the album, it's the Fish take on James Brown, with lots of great guitar and a silly background with screaming girls. "Susan" is a delicate tune with meandering guitar, it loses something over the tunes of similar tempo in the first two albums because it's not as musically weird. "Mojo Navigator" is David Cohen's or Barry Melton's voice (I think) over mediocre rock, maybe it's their take on Jim Morrison or something.

"Bright Suburban Mr. & Mrs. Clean Machine" is the Fish jab at straight America. The "Good Guys/ Bad Guys Cheer" is hilarious, "The Streets Of Your Town" is Barry Melton's song against New York City, America's most over-rated hangout. I can totally relate, having had a similar experience in September of 1984. Hmmm. Nostalgia for bad experiences in the '80s, that's got to say something. "The Fish Moan" is unimportant, "The Harlem Song" is a parody of good old-fashioned White racism," Waltzing In The Moonlight" is some boring hippie nonsense done to the cha-cha-cha, "Away Bounce My Bubbles" is almost like Gregorian chanting but is considerably less interesting, "Cetacean" is Bruce Barthol's attempt to compose a tune as stony as the ones on first two albums, he almost pulls it off but it gets mixed in with imitation Hollies or bubblegum-rock or something along those lines. We finish up with a good hypnotic Vietnam protest, "An Untitled Protest," a tune reminiscent of Phil Ochs' "White Boots Marching In A Yellow Land" (off the Tape From California album) though Ochs' lyrics are of course better.

Country Joe and the Fish were an (initially) agit-prop band with a good sense of humor, an elevated consciousness, and a solid subcultural background. For those reasons, I really want to sing with them on every track. On albums such as Together, however, their mediocrity really shines through as their most prominent feature on about half of the tracks. Everything on the album is innocuous, but there's nothing big here, though this album is good and I'll keep it. If there's anything of any force to recommend this album, it's that it was made during the 1960s, a period of musical history that put the others to shame with its creative spunk, while the political world of that time brought down the curtains upon a then-raging Keynesian idealism while the Soviet world brought down creative Marxism with tanks in Prague.

If you want to hear better political music, listen to Phil Ochs; if you want hippie music, find some Jefferson Airplane or Hendrix or early Joni Mitchell, or maybe some late '60s Miles Davis, if you're not the type to search for Greatful Dead bootlegs. If you want to hear something really creative, listen to late-period John Coltrane or late-period Eric Dolphy. If you're finished with all of that, and you're still looking for something new, you may wish to explore albums such as Together.
by Adamus67 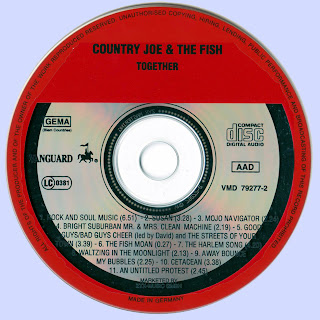