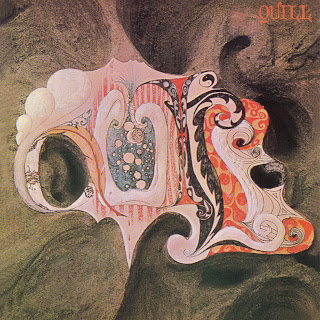 This one came as a total surprise package to this reviewer. On reading their unexpectedly extensive Wikipedia entry I found that they’d played at Woodstock despite being an unrecorded act; that they were a popular regional attraction around Boston and the northeast; and that virtually all of them were multi-instrumentalists with a penchant for swapping the instruments around onstage: guitarists and keyboardists switching to horns, woodwind or cellos at the drop of a setlist.

The Woodstock slot came courtesy of a well-received appearance in NYC, and on hearing of their impending festival appearance with its film and live album potential, Ahmet Ertegun signed Quill to Atlantic’s Cotillion subsidiary in the summer of ’69.

The non-appearance of the band’s set in the Woodstock movie contributed to the label losing interest and the band’s insistence on producing the debut album themselves didn’t particularly help their cause with Ertegun either. Although it was released the following year it received next to no corporate support and quickly stiffed. Like many another unsuccessful opus of the period it lay doggo for decades until resuscitated for CD reissue by the excellent Wounded Bird imprint in 2010.

The music itself is also surprising, distinctively and wilfully strange, somewhere between the Doors and early British prog-rock. The band members are all credited under wigged-out pseudonyms, Beefheart-style, and the compositions themselves have similarly wacky titles. Sonically, it’s sparsely realised despite the multifarious talents of the musicians, populated by barely-audible organs and pianos and mixed-back guitars and drums – the most prominent instrument is often the bass guitar.

The arrangements are of the apparently loose, adlibbed type that can only result from the most meticulous orchestration and rehearsal. The lyrics are far from the usual hippie abandon of the day, laden with social commentary, and the backings are full of irregular chord sequences and modulations. There’s no telling where it’s going from one track to the next, or sometimes within any given track.

After an unpromising raggedy-ass intro, the opening “Thumbnail Screwdriver” builds around a catchy Hendrixoid guitar riff and features a chiming solo by harmonised guitars. The nine-minute “They Live The Life” is a minimalist shuffle with warped Moody Blues harmonies and a sparse drum solo which builds into a collapsing cacophony of chanting and percussion, apparently a favourite concert closer.

“BBY” showcases the alternative horn skills of the players and comes over like Zappa bowdlerising Chicago, while “Yellow Butterfly” uses only flanged, wah-ed guitar and sparse bass and has ghostly vocals redolent of Syd Barrett. The closing “Shrieking Finally” opens with a droll mock Gregorian chant which leads into a fragmented prog workout with distinctive piano trimmings. Although all the musicianship is excellent, it’s probably Roger North’s inventive and technically adroit drumming that stays longest in the memory.

It’s all wacky and it all works. You won’t whistle the melodies as you walk down the street, but without doubt this is another rarity that deserves its rediscovery.
by Len Liechti 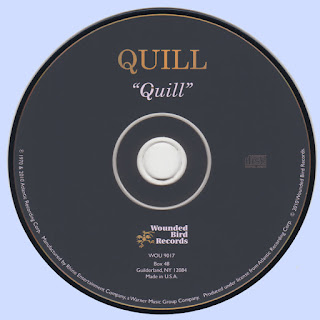