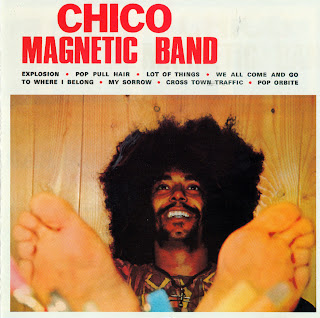 Formed in Lyon in 1969 as Chico & The Slow Death because they meant it (man), the following year they renamed themselves Chico Magnetic Band and comprised Chico on death throttle vocals; Patrick Garel on pounding dunderhead drums; Alain Mazet on Richter scale raising bass and Bernard Monneri on howlingly fierce shred guitar with attached fuzz/wah hardwired directly into his frontal lobes.

And what this crew laid down was a freewheeling and loose mess that created its own language, cycling as it does through a back catalogue of the collective id, the rejected odd and the accepted stinky: as though every emotion every uttered for generations and every symbolic thrust of the battering ram against the gates of nothingness have touched down all on one album with an overdose of ESP.

Released on the tiny Disques Vogue subsidiary label Box Office, “Chico Magnetic Band” was recorded at two different Parisian studios: Europa Sonor (where Magma recorded their first album and Aphrodite’s Child laid down their classic “666” double album) and Wagram Studios. And judging the results of those last two named records, Europa Sonor had some uniquely sounding rooms on their premises, which carried over with the widest sonic spectrum onto “Chico Magnetic Band.”

Producer Jean-Pierre Rawson boisterously captured the group’s thunder live in the studio as clear as an unmuddied lake while also resounding with an unstoppable fury. These sounds are everything I search for in rock’n’roll. It’s tripped out. It’s psychedelic. It’s heavy. It’s very heavy. It roots me to the ground AND it’s got experimental electronic freak outs as well as moments of chilling acoustic introspection that can only portend heavy shit raining down and they never made an umbrella THIS strong to withstand such a torrent.

It’s heavy to the soul as well as to the ears, and its not only as bold as love but it’s bolder than fuck and although it only lasts for a half an hour look out because there’s a fire in the hole cause Chico and The Magnetic hommes are not only coming through, but coming through in the biggest way possible.
by The Seth Man 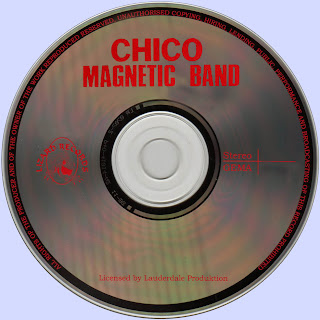