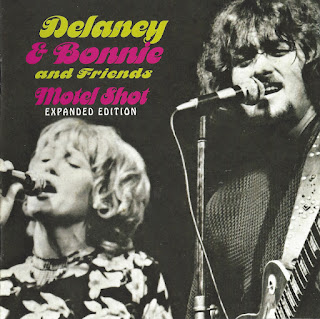 The magic of the late-night jam session is one of those rock & roll legends that, much like Bigfoot, doesn't have a lot of concrete evidence to support it. But Delaney & Bonnie believed in it strongly enough to try to put one on tape. Released in 1971, Motel Shot was intended to document the sound and vibe of the after-show jams that Mr. and Mrs. Bramlett often took part in while on the road. After an attempt to record one such jam in the living room of recording engineer Bruce Botnick, Delaney & Bonnie and their friends ended up doing it over again in a recording studio. But if Motel Shot doesn't seem as spontaneous as the principals wanted it to be, it does have a loose, playful feel that's honestly winning.

The performances are almost entirely acoustic, and the set is dominated by traditional blues, gospel, and country standards that this crew could ease into comfortably and bend to their moods. Given that Delaney & Bonnie's friends for these sessions included Duane Allman, Leon Russell, John Hartford, Dave Mason, Gram Parsons, and Joe Cocker, it's no great surprise that this material is significantly more accomplished that most folks' musical goofing around, even if Jim Keltner is just slapping an empty box instead of playing a drum kit. And Delaney & Bonnie are both in fine voice on Motel Shot, passionate but very much in the moment, while the gospel jam of "Takin' About Jesus" features some powerful vocal interplay between Bonnie and Cocker. You can't plan a moment of spontaneous brilliance, but Delaney & Bonnie were just smart enough to know their muse didn't like to be forced, and Motel Shot is an admirable compromise between a 2 a.m. guitar pull and an acoustic studio session, and it was also their last truly effective album.
by Mark Deming 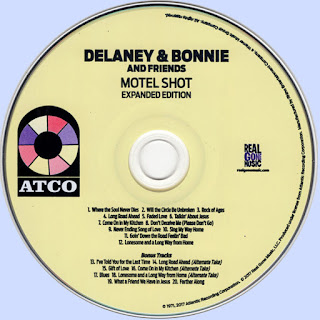 Free Text
Text Host
Posted by Marios at 7:38 AM 1 comment: