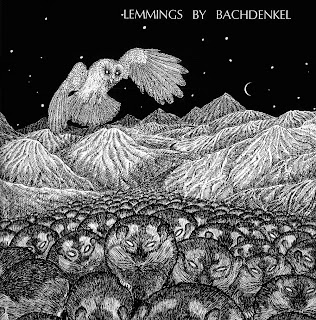 Bachdenkel started out life as the U NO Who.  This late 60s group had been active on the Birmingham scene for some time and played psychedelic pop.  They recorded a handful of respectable tracks which were pitched to the Beatles’ Apple label but no deal ever materialized.  The U NO Who would go on to become Bachdenkel at the end of the decade.  Bachdenkel’s lineup looked something like this:  Colin Swinburne on vocals, guitar, piano, organ and harpsichord, Peter Kimberley on vocals, bass and piano, Brian Smith on drums, and Karel Beer on Organ.

Bachdenkel would relocate to France and record the great Lemmings album in 1970.  Although the LP was completed by the summer of 1970, Phillips didn’t release Lemmings until 1973 - released throughout Europe but not in the UK.  This really sealed this unique British group’s fate – unfairly so because they were very talented.  I believe a UK reissue/rerelease appeared in the late 70s (maybe 1978) but by that time Bachdenkel had ceased to exist.    The group released another solid progressive album titled Stalingrad (1975) and toured Europe in 1976 before breaking up.

And as for the Lemmings LP? It’s one of the best 70s progressive rock albums out there.  The musicians here keep their egos in check and know when to end a song, unlike Yes or ELP.  To me this is a much better (and more interesting) album than anything Yes or ELP would ever release.  The ringing guitars dominate Bachdenkel’s sound but there are tasteful keyboards as well.  Some people have linked Bachdenkel’s sound to Caravan, Abbey Road era Beatles, and King Crimson.

These are all valid comparisons – think of Bachdenkel as a missing link between the Beatles and the mighty Crimso, progressive guitar pop with a slight psychedelic hangover.  “An Appointment With The Master”, the LP’s most popular song, is a lost classic that might be what the Beatles would have sounded like had they lasted into the progressive rock era.  Crashing drums and superb psychedelic guitar work give this cut a fresh edge.  “Translation” and “Equals” are also outstanding dark mood pieces that sound completely modern by today’s standards – this LP has not dated one bit.

All of Lemmings 7 tracks are excellent, whether it be the 11 minute epic “The Settlement Song” or the shorter, tuneful tracks like “Long Time Living” – every works beautifully.  So…interesting arrangements that take chances (unique twists and turns), a dark aura, rock solid songwriting, Caravan-like vocals, and great musicianship unify this very special musical statement.  Any fan of classic rock needs to own this essential masterpiece.
Rising-storm 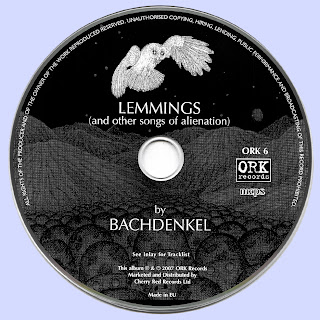