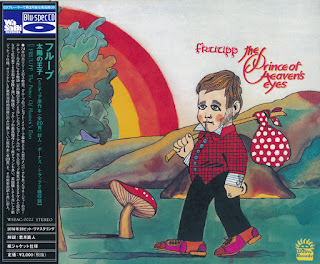 With two albums under their belt, each displaying a natural progression, and gaining a reputation as one of the most solid live acts around, Fruupp were back in the studio that same summer to produce The Prince Of Heaven’s Eyes. It was released on 8th November 1974 the very same day that I and a friend and fellow fan caught them live mid tour to promote the album. The third album is regarded by most (including yours truly) to be their strongest and most assured. Most surprisingly McCusker’s compositions take a backseat with Houston given credit for writing six out of the eight songs. The albums title and concept are taken from a mythical story written by Paul Charles which was included as a separate booklet with the original vinyl release and has been thoughtfully reproduced to accompany this CD.
The tuneful opening cut It's All Up Now has shades of Barclay James Harvest and remains to this day my favourite Fruupp song. Gone were the strings of previous recordings, replaced by Houston’s symphonic keys and McCusker’s lyrical guitar. The sinister vocals during Prince Of Darkness echo Peter Gabriel’s character led performances with Genesis and it also made a curious choice for the bands first single released in October 1974. Jaunting Car is a whimsical Mellotron led instrumental whilst Annie Austere literally burst from the speakers sounding very like The Who, returning to the punchy but melodic style of the first album. Farrelly’s vocals are particularly expressive here with more than a hint of an accent to reveal his Irish origins. He also adds his talents as flute player to the poignant Knowing You, the first of two McCusker penned songs that open what would have been side two of the original vinyl release. It segues into the mini-epic Crystal Brook which again brings BJH to mind especially their classic Mockingbird. The two tracks combine into one of the bands finest ever creations.
The piano opening to Seaward Sunset sounds distinctly Chopin and develops into a beautiful and delicate melody that would have sat very comfortably on Ant Phillips’ The Geese And The Ghost album. The Perfect Wish also features classical style piano together with a stately Andy Latimer flavoured guitar line. John Lees appears to be the role model for the guitar sound whilst the classical inspiration is Sibelius’ 5th Symphony with lush waves of synth strings providing a perfect, grandiose closer. The bonus track Prince Of Heaven is something of a rarity in that it was co-composed by the band and was left off the original release due to space constraints. A pity because it would have provided the perfect prologue to explain the story and with a strong piano and guitar led melody building to a rousing climax it’s a quintessential slice of Fruupp. The single version of Jaunting Car on the other hand is instantly disposable as to my ears it’s identical to the album version.
by Geoff Feakes 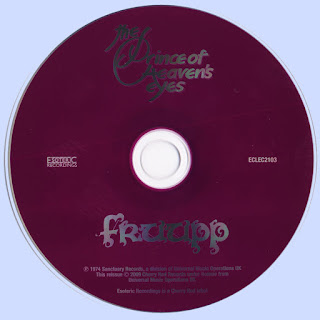