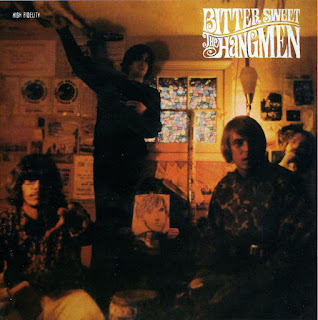 Formerly known as The Reekers and based in Washington D.C., the Hangmen were centred around the talents of guitarist Tom Guernsey and put out three 4 5 's, plus the album Bittersweet, in that groundbreaking year of 1966. Originally released on Monument - SLP 18077 the album is a fine example of the U.S. mid 60's sound whether it's close harmony soft pop, or a stomp through some fuzzed beat/garage/R&B.
Their first two classic 45's - the harmonica driven punk of What a Girl Can't Do, and the gentle fuzz of Faces are both reworked on the album, and included alongside cover versions of Dream Baby - 'psyched' with a hint of sitar Let It Be Me, and an extended workout of Van Morrison's Gloria. Elsewhere the British Invasion presence is evident as well as the closer to home sounds of T h e Byrds and Lovin' Spoonful. Groovy listening from beginning to end!But in 1966, the times were still a-changing, musical boundaries too, leaving many bands including the Hangmen behind. Thankfully though, what's not been allowed to slip away here is this innocent reminder of that golden age...Bittersweet by the Hangmen!
An announcement in the May 17, 1967 edition of the Star Ledger said that the Hangmen had changed their name to The Button to pursue further psychedelic stylings. Paul Dowell and George Daly were already out of the group and replaced by Alan Flower, who had been bassist for the Mad Hatters, and George Strunz. By June Tom Guernsey had left the band to be replaced by John Sears, and the group were being billed as “The Button, formerly The Hangmen.”
Relocating to New York, the Button cut an unreleased session for RCA and played at Steve Paul’s The Scene on West 46th St. and at the Cafe Au Go Go on Bleeker. Berberich left the band leaving Tony Taylor as the only one of the Hangmen still in the group. They band changed its name to Graffiti, recording for ABC.
Meanwhile, Tom Guernsey produced a legendary 45 for the D.C. band the Piece Kor, “All I Want Is My Baby” / “Words of the Raven”. He also wrote, produced and played on a great 45 by another Montgomery County band, the Omegas, “I Can’t Believe”. For the Omegas’ session, Tom played guitar and piano, Leroy Otis drums, and Joe Triplett sang, with backing vocals by the Jewels.
Bob Berberich briefly drummed with The Puzzle then joined George Daly and Paul Dowell in Dolphin a group that featured the young Nils Lofgrin. Berberich stayed with Lofgrin through Grin, while Paul Dowell of Hangmen became equipment manager for the Jefferson Airplane, and George Daly went on to A&R with Elektra Records.
Tom Guernsey deserves a special word of thanks for giving his time to answer my many questions, and also for loaning me the Evening Star magazine.
Tom Guernsey passed away on October 3, 2012 in Portland, Oregon, followed less than two months later by David Ottley, on November 27, 2012.
by Chris Bishop 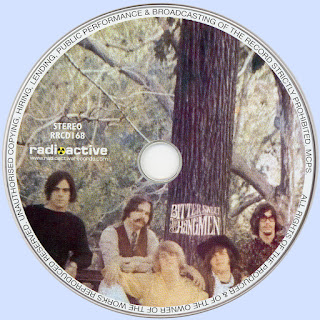