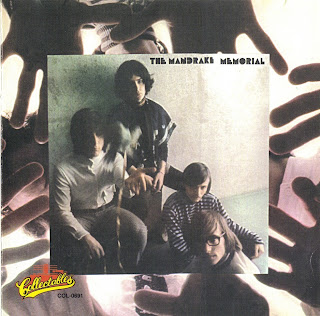 Anyone who lived in Philadelphia in the late '60s would remember the Mandrake Memorial well. They opened for many of the star rock bands who passed through the city, and in terms of local popularity, they were probably only second to the Nazz. Outside of Philadelphia, they were scarcely known whatsoever, though they did manage to produce some fine second-division psychedelia. As vocalists they were adequate, but they were accomplished players and interesting writers, dressing their solid melodies with liberal jazz and Middle Eastern influences. Guitarist Craig Anderton became a noted music technology writer, contributing to magazines such as Electronic Musician.

Their debut album, a suite-like collection features some haunting, first-rate songs, such as "Bird Journey," "Here I Am, " and "Dark Lady." With their harmonies and interplay between guitar, electric keyboards, and occasional sitar, they were very much a band of their age, but played with a drive and precision that anticipated progressive rock.
by Richie Unterberger

Mandrake Memorial's trippy debut--dig that sitar and electric harpsichord--did very well for them along the East Coast, partly because they played live so incessantly. George Manney says: "They were the unofficial Trauma 'house' band. The Trauma was an underground venue on Arch Street (1967-'68) that hosted bands such as Velvet Underground, Frank Zappa and the Mothers of Invention, Tim Buckley, Moby Grape, plus many more." This eponymous album was ethereal and melodic, a quiet contrast to the tumultuous days when it was released.
P/W 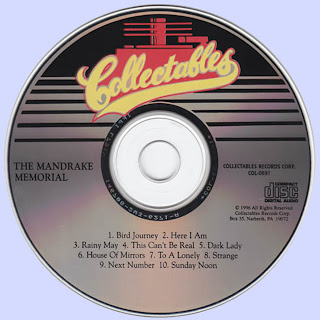 Free Text
Text Host
Posted by Marios at 6:41 AM 2 comments: