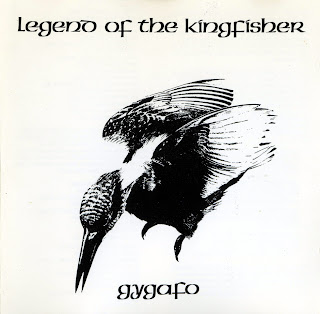 For 1973, British group Gygafo's only album is somewhat of an anomaly as it sounds quite like a psych-rock album from a few years earlier with the fuzz guitar and organ. But despite the 60's tonal qualities, Gygafo also show the prediliction for structural complexity as initially portrayed on the album's second track, "A Room With a View," that trades between a whimsical progression and a more aggressive classical rock section.

And, in fact, it is this threshold betwixt late 60's psych and embryonic progressive rock that Gygafo pirouette around throughout . . .These phases are particularly distinct on the long side one-ending, three-song suite, "Waiting for the Rain/Entering Winds of Long Ago/Season's Weather (Coming Home)," although once the first half of the album is through, Gygafo keep solidly to a whimsical, late 60s, bay area, psychedelic influenced rock.

In conclusion “ The Legend of the Kingfishers” Is a fair prog rock with some folk and hard rock influences, including some sinuous ebb-and-flow guitar lines, well worked-out vocal harmonies, haunting melodic figures, and classically flavored keyboard passages. 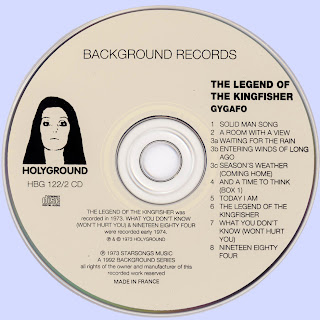