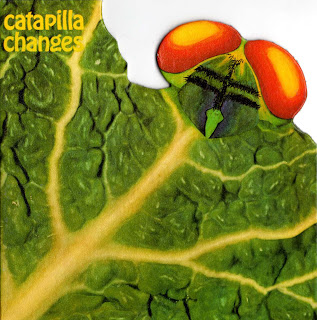 Catapilla was a British group acting short time during the early seventies. The founder of the band was saxophonist and keyboardist Robert Calvert. The band recorded two very interesting albums released by Vertigo. Their debut album contained a mix of heavy rock and jazz. Album characterized, by guitar passages interspersed with lots instruments keyboards, organs and saxophone

The great attraction was the vocalist Anna Meek, has a very distinctive voice and original way to use it. Sometimes fragments of the group resembled the Colosseum, Van Der Graaf Generator, Soft Machine and Nucleus.

Scary cover, too. A giant die-cut catterpillar gnaws its way through the cabbage leaves. Will they come for you too? The lettering is perhaps a bit too tolerantly chosen. Too much trouble to design your own letters? The inside shows the backside of the caterpillar, which is prolongued even into the inside of the cover where the disc has its place. Interesting idea!

This LP is rare and very very hard to find,one of the most mysterious of all the innovative acts signed by progressive Vertigo Swirl label in the early seventies. This short-lived progressive rock band made an unforgettable impression upon the face of music before their exit into obscurity. It's a wonder how a group that was so well ahead of their time and who were literally one of the pioneers of an entire generation of music could be so unrecognized. Now its time to give credit were it is so rightfully due.

Plate was also curious, as debut the style group remained the same only slightly enriched it even elements of psychedelia and experimental music. It features the powerful vocals of Anna Meek that have been variously described by critics as ‘elegant’ and even ‘witch-like’.

Her voice is complemented on a series of extended performances by the saxophone playing of leader Robert Calvert (who is not to be confused with the singer and poet Robert Calvert of Hawkwind fame). Catapilla’s style veers between avant-garde jazz-fusion and experimental acid rock and there is plenty of room for experimentation on tracks Exorcising and often wordless vocals by Meek still dominate the soundscapes, as do Calvert's ubiquitous saxes, frequently two at the time.

Also noteworthy: the strange mixture of slow hard-rock and Eastern melodies on Thank Christ for George, moments of savage guitar lines are calmed by vocals that seem to float over the top of a soothing saxophone while the complexity of it all pulls you into another dimension.

They both clock in at over twelve minutes each. Regardless of the length of the songs you are left wanting for more as well as the unexpected tranquillity of the closing track. Unique sounds that make for uneasy but rewarding listening. Vocalist Anna Meek and saxophonist Robert Calvert play off of each other and ride the prog-rock roller coaster of ever changing sound. Prog-rock enthusiasts get a glimpse of where groups like Pink Floyd and Roxy Music could have derived some ideas from. Meek's eerie vocal rants and Calvert's poignant and atmospheric saxophone are everything Graham Wilson (guitar), Ralph Rolinson (keyboards), Carl Wassard (bass), and Brian Hanson (drums) needed to launch a sound that is all at once mysterious as it is aurally exciting.

This LP entailed four ambitious songs of progressive jazz-rock fusion that help to lend a hand in setting the standard for what was to become a new genre. The colorful gatefold sleeve, which has a picture of a caterpillar peeping over a leaf as it enjoys its meal, opens and there is a maggot squirming. This image is a point of reference to the music, its very symbolic. Progressive rock is very much like the process of birth and rebirth.

The caterpillar goes into a cocoon and emerges as a beautiful butterfly. They couldn't have chosen a better analogy or illustration to explain the musical process. Its time for us all to investigate the impact that groups like Catapilla has had on the history and development of prog-rock. Despite this, the album went almost unnoticed. In part, it was because the year 1972 was full of many important works of rock

Robert Calvert joined Hawkwind and for many years with great success in this group, he continued his musical career. The fact remains that Catapilla, is more appreciated team today - over 40 years after its debut, than in the years of its activity.
by Adamus67 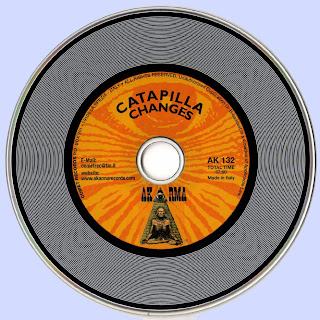 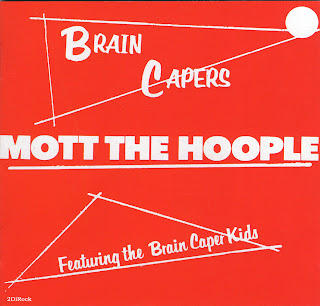 Mott's last album for Island is a belter. Needing an injection of craziness that was lacking on Wildlife they reluctantly joined forces with Guy Stevens once again and the result is a raw, heavy metal punk album six years ahead of its time.

Of the pre-Bowie albums, this is easily the fans' favourite. Like Mad Shadows, this was recorded live in the studio, and all the tracks were laid down in about four days. Live tapes from the time show just how well this album captured their live sound.

Opener Death May Be Your Santa Claus is frantic (check out the exuberant "Wooo!" at the end). Darkness Darkness features Mick Ralphs on vocals and is a guitar-driven rocker and noteworthy for not featuring Verden at all. The Journey is one of Ian's epic ballads and it is an interesting exercise to compare this to the alternate version recorded a few weeks earlier (included as a bonus track).

Sweet Angeline is another rocker, one that would remain in the live set to the end. Second Love is interesting - the first of Verden Allen's compositions Mott recorded and beautifully sung by Ian. The Moon Upstairs is another full-tilt rocker with is in part a message of defiance to Island: "We ain't bleeding you, we're feeding you, but you're to f***ing slow".

The LP closed with The Wheel Of The Quivering Meat Conception, with is another end-of-session-jam tape reclamation job, this time as an earlier take of The Journey descends into complete chaos.

Bonus tracks here are the non-LP single Midnight Lady and an earlier version of The Journey (which is more acoustic than the LP version).

Sleeve notes as always are excellent, as is the sound quality. The CD also reproduces the original LP cover .
Hunter-Mott 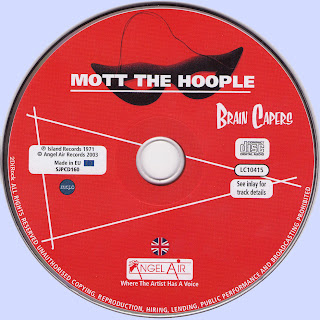 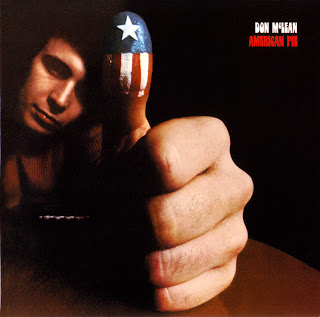 Don McLean's second album, American Pie, which was his first to gain recognition after the negligible initial sales of 1970's Tapestry, is necessarily dominated by its title track, a lengthy, allegorical history of rock & roll, because it became an unlikely hit, topping the singles chart and putting the LP at number one as well. "American Pie" has remained as much a cultural touchstone as a song, sung by everyone from Garth Brooks to Madonna, its title borrowed for a pair of smutty teen comedies, while the record itself has earned a registered three-million plays on U.S. radio stations.

There may not be much more to note about it, then, except perhaps that even without a crib sheet to identify who's who, the song can still be enjoyed for its engaging melody and singable chorus, which may have more to do with its success than anything else. Of course, the album also included "Vincent," McLean's paean to Van Gogh, which has been played two-million times. Nothing else on the album is as effective as the hits, but the other eight original songs range from sensitive fare like "Till Tomorrow" to the sarcastic, uptempo "Everybody Loves Me, Baby."

American Pie -- the album -- is very much a record of its time; it is imbued with the vague depression of the early '70s that infected the population and found expression in the works of singer/songwriters. "American Pie" -- the song -- is really a criticism of what happened in popular music in the '60s, and "Vincent" sympathizes with Van Gogh's suicide as a sane comment on an insane world. "Crossroads" and "Empty Chairs" are personal reflections full of regret and despondency, with the love song "Winterwood" providing the only respite. In the album's second half, the songs get more portentous, tracing society's ills into war and spiritual troubles in "The Grave" and "Sister Fatima."

The songs are made all the more poignant by the stately folk-pop arrangements and McLean's clear, direct tenor. It was that voice, equally effective on remakes of pop oldies, that was his salvation when he proved unable to match the songwriting standard set on Tapestry and this collection. But then, the album has an overall elegiac quality that makes it sound like a final statement. After all, if the music has died, what else is there to say?
by William Ruhlmann 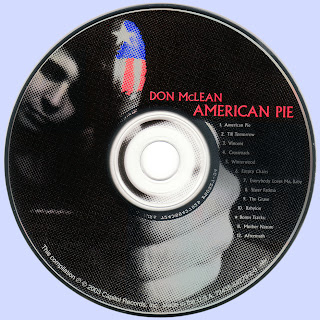 Free Text
the Free Text
Posted by Marios at 3:27 AM 5 comments: