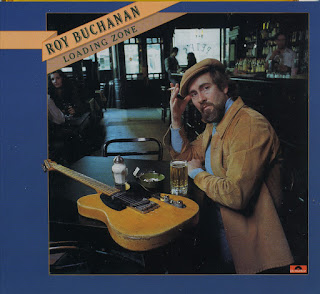 Well, this 1977 release from the guitar master (who ultimately and sadly took his own life in the late 1980's) just happens to be one if his rare fusion recordings, and contains a few tunes that the progressive listener will no doubt appreciate.

"The Heat of the Battle" kicks things off in rousing fashion. This raging song is like a head on collision between vintage Allman Brothers and Wired era Jeff Beck, featuring smoldering jazz licks from Buchanan and Ray Gomez, acrobatic bass from Stanley Clarke (who wrote the song), drums from Narada Michael Walden, and nimble keys courtesy of Malcolm Lukens. The more moody and introspective "Hidden" follows, where Roy's electric and acoustic guitar passages are massaged by Jan Hammer's wonderful acoustic piano and Stanley Clarke's picolo bass. Additional strings and flute bring this one close to prog rock waters after the more upbeat opening fusion romp. "The Circle " is a rocking vocal piece, featuring great male and female vocals and Roy's funky guitar leads, while "The Adventures of Brer Rabbit and Tar Baby" is an engaging little country pickin' ditty where Buchanan and Clarke get to strut their stuff. Dixie Dregs anyone?

Fans of Booker T and the MG's will love the searing blues interplay of "Ramon's Blues" as well as the cover of "Green Onions", where Roy and Steve Cropper get to trade some serious blues licks over some meaty organ from Lukens. "Judy" is another jazzy number, written by Walden, that showcases some rampaging fusion solos from Buchanan over beds of piano and organ, while Walden and bassist Will Lee lay down some funky rhythms. Again, the comparison to Jeff Beck's instrumental work is evident. Screechingly heavy guitar rock meets the blues on "Done Your Daddy Dirty", a great vehicle for Roy's distorted blues-rock meanderings (this guy smokes!), then segues into the sappy Walden penned "Your Love", the CD's one lone clunker, and totally out of place here. Featuring no guitar and Buchanan on lead vocals, this one might have been nice had they left it instrumental, as there's some cool flute passages and brass in the mix.

Loading Zone is an essential purchase for guitar and fusion fanatics, and one of the better "lost classics" of the 70's.
by Pete Pardo 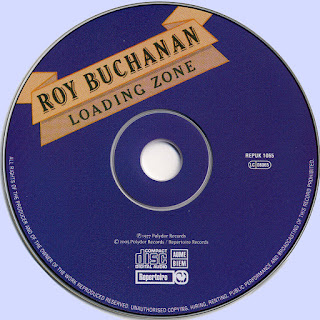 Free Text
the Free Text
Posted by Marios at 5:29 AM 2 comments: