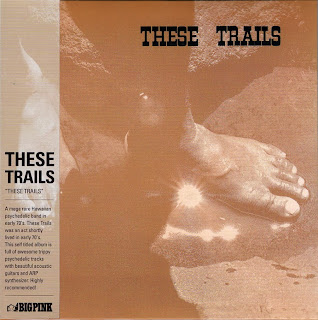 These Trails was recorded in Honolulu in 1973 and originally released in a small private pressing, and it is one of those rare albums whose backstory is almost wholly audible in the music. Primarily written and performed by singer-songwriters Margaret Morgan and Patrick Cockett, the album has long circulated among fans of obscure psych-folk, and it has been reissued several times in perhaps-not-entirely-legit versions. The album's reputation is well-earned, as These Trails is a lovely and incredibly evocative slice of Pacific folk-rock, and Drag City has performed a good service by finally reissuing the album in a handsome new authorized edition.

The musicians behind the creation of These Trails were never even officially a band-- they played no professional gigs together and made no other recordings. (Which is why there are no outtakes or bonus materials included with this reissue.) Margaret Morgan and Patrick Cockett lived together in Hawaii in what sound like idyllic circumstances, writing and playing songs based largely on the majesty of their natural surroundings. The duo was joined in the studio by singer-guitarist Carlos Pardeiro and Dave Choy, a studio engineer who embellished the group's acoustic material with what was then a state-of-the-art Arp synthesizer. The addition of these vintage electronics helps to give the album a slightly off-kilter wobble, creating an otherworldly atmosphere that would echo decades later in the work of Stereolab and Broadcast.

For the most part, however, the music on These Trails sounds as though it could have been created only in its own specific time and place. Like many of the best psych-folk documents of the era, the album seems to have been produced in a completely irony-free environment, and it has a sense of guilelessness that would be virtually impossible to reproduce today. Morgan sings in a voice highly reminiscent of Joni Mitchell, but with a distinctive island lilt of her own. Throughout the album she harmonizes with Cockett in a manner that sounds both unique and effortless, backed chiefly by acoustic guitars, dulcimer, and Choy's mysterious burbling Arp.

Lyrically the album abounds with references to local Hawaiian landmarks, flora, and vocabulary. Songs such as "Our House in Hanalei" or "Waipoo" can serve as a sort of personal guidebook, with Morgan and Cockett pointing out various natural features along the trail. ("Banana leaves describe the breezes... gingers grow, where white buds lay sleeping.") Especially evocative is "Rusty's House", which describes a visit to the front porch of surfer Rusty Miller, whose remote home was accessible only by foot, in an account so vivid that the listener can practically feel the sunshine and taste the pot smoke.

Even more transporting are the album's instrumental interludes "Psyche I" and "Psyche II", on which Choy gently explores the Arp's cosmic possibilities. These mildly trippy moments aside, most of the action on These Trails remains firmly affixed in the verdant Hawaiian soil. The songs are short and melodic, and the musicians avoid many of the indulgences that mar so many psychedelic albums of the time period-- there are thankfully no prolonged organ solos or overt references to The Lord of the Rings.

Patrick Cockett has gone on to perform with such artists as Buffy Sainte-Marie and Taj Mahal, but by all evidence the enigmatic Margaret Morgan, who passed away in 2004, never recorded again. This fact makes These Trails seem all the more like a snapshot from an exquisite but fleeting moment in time. And though it is interesting to speculate where their music might have gone from here if the artists had continued to write and record together, there is no denying that they captured something special on These Trails, and while the album plays that seems like enough.
by Matthew Murphy 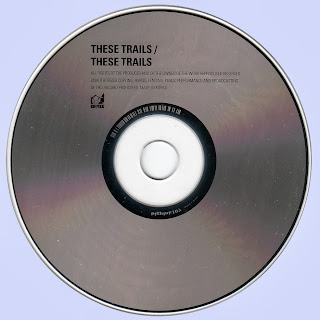