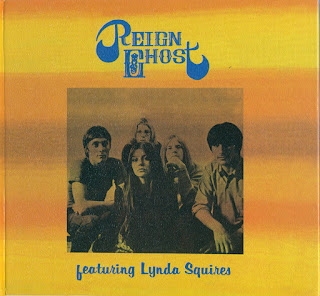 1969 was an incredibly busy year for me. I was at the ripe old age of 18. In an era when bands were reinventing themselves at lightning speed with each album, I went a step further. In 1969 I was in three bands all of whom recorded. The first Reign Ghost album came out at the beginning of that year and by year’s end I had formed and recorded the second Reign Ghost album and founded my longest lasting ensemble, Christmas.
The second Reign Ghost album or ‘Reign Ghost featuring Lynda Squires’ as the cover states, or ‘The New Reign Ghost’ as we were billed at our initial gigs, had a rapid genesis. The line-up of the first album quickly changed in mid 1969 as Lynda and I were increasingly restless to find something different. There was a local 3 piece band we admired called Mechanic Elusion, comprising John Pudlis (whom I had  played with in one of my first bands, The Things); Russ Erman and Rich (Helge) Richter. Rich was the cousin of my friend Wolfgang Hryciuk both of whom would later be in the first incarnation of Christmas.
I recall that Lynda and I thought Mechanic Elusion were a very cool ensemble. I recall that we approached them and asked if they wanted to amalgamate and become a new version of Reign Ghost. Obviously, they were into it. Pudlis, Erman and Richter had a lot of interesting original material. (What they lacked in lyrical content they made up for in melodies and interesting chord progressions - ‘Mother’s Got Trouble’ is a case in point). Clearly, Mechanic Elusion (and particularly Pudlis) had been big Iron Butterfly fans as is evident in some of their writing (‘Enola Gay’) and Pudlis’s vocal tone. Lynda and I didn’t seem to mind that too much.
Lynda and I were still under contract to Allied/Paragon so we brought the ‘New Reign Ghost’ into the studio very quickly.  It would seem that all this transition took place between June and July of 1969. The new band played a lot gigs in the Oshawa area including high schools and the 2nd big rock show at the Civic Auditorium.
It’s incredible to me when I look back and think that in a few short months, the first Reign Ghost folded, the second Reign Ghost was born and then by the end of the year - that version of Reign Ghost had also folded so that by December I was rallying the troops to form Christmas! The New Reign Ghost, I remember, folded for a couple of main reasons - John Pudlis was getting married and wanted to ‘settle down’; Russ Erman wanted to devote time to running the family printing business in Oshawa (Arjay Printers) and Rich - well Rich, he came with me into the Christmas fold. Around this time Lynda and I had auditioned for the Toronto production of ‘Hair’. Lynda got the gig and that left me free to form and pursue Christmas, my ultimate dream band at that time.
In retrospect, listening back to this newly remastered version of the 2nd Reign Ghost album, I can enjoy it. My only regret is that I didn’t get some of my better songs on the record. The tune I’m most pleased with is ‘Solar Nice’ which is a pretty accurate indication of where I wanted to go songwriting wise. ‘Breast Stroke Blues’  was a complete satire and as such it’s a bit of a throwaway. I hate to say it - but we were kind of ‘mocking the blues’. ‘Ain’t It Great’ was one of my lesser tunes and I’m not quite sure why we put it on the record. Of course, ‘Long Day Journey’ is a carry-over from the first Reign Ghost album. I guess I wanted to have a rockier version of that. I’m impressed with the recording over-all. Considering, once again we were recording in Cousin Bill Bessey’s basement (see insert notes on first Reign Ghost album). The guitar tones are pretty cool and the vocal recording is nicely strident. As was the custom, the album was done VERY quickly with little time for corrections or re-takes but as such - the performances hold their own.
We artists can be pretty hard on ourselves, but I’ve learned to appreciate the older stuff over the years, for it’s historical value if nothing else. The Reign Ghost albums were both immediate and spontaneous products of the times. Things went from the mind to the studio to the public with amazing rapidity in those days. As the outpouring of a seventeen and then eighteen year (respectively) poetic mind I can’t really fault either album. The Canadian music business was still in the womb and nobody really knew what they were doing, therefore I’m amazed and pleased that the recordings can still generate interest with new audiences.
by Bob Bryden, Sept. 22, 2013 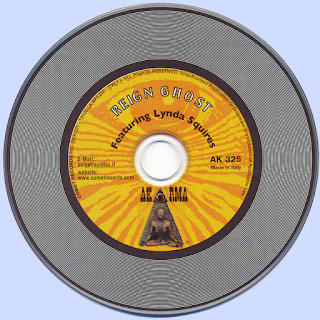