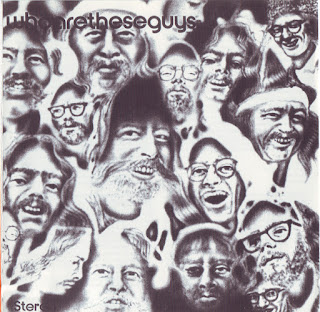 "Who are these guys?" may be a legitimate question when it comes to the quasi-psychedelic obscurity Tayles, but their one slice of rock, aptly enough titled Who Are These Guys?, is freewheeling and fun while maintaining some of the underlying menace that characterized the genre. That is not to say that the album necessarily belongs to the highest level of early-'70s psych -- it is, in fact, much closer to straight pop -- but the band's music was singular enough to deserve its regional popularity and its album good enough to have deserved a more widespread audience than it gained upon its release in 1972.

Add to that the fact that the album was recorded entirely live and Who Are These Guys? shows the band to be talented, inventive musicians who were capable of writing solid, commercially ready songs that, nevertheless, passed by unheard outside the local area in their heyday. The Gear Fab reissue opens with each side of the 1971 double-gatefold Tayles single. Two of the songs, "Funny Paper Sam" and "It's High Time" were deemed too risqué for the AM radio censors but are actually a lulling pop song and a demented, slightly off-kilter rave-up, respectively, while the other two songs are also strong, including the good-time rock of "Bizarro Ben," somewhat of a signature song for the band and the only tune that shows up as part of the live set. From the beginning of the live album, Tayles displays its proficiency. The short, beautiful, flute-led "Introduction" segues into a "Bizarro Ben" that is more raucous than the studio version. From there, the band tears into an assortment of bassist Jeremy Wilson and guitarist Bob Schmidtke originals.

There are recognizable influences in the music, but, for the most part, the band does not betray too significant of a debt to any of their more well-known contemporaries. They also have no problem investing their music with humorous, poppy, soulful, even schmaltzy elements, and all with interesting results. They can keep it short and sweet, as on "Did It," rip through quick, idiosyncratic blues ("Life on Other Planets Shuffle" and "Apocalypse Blues"), or let loose with some extended instrumental sections, as in "Black Widow Spider" and "Guitar." None of it will make a listener re-evaluate the state of rock music, but it offers at least a couple fun listens.
by Stanton Swihart 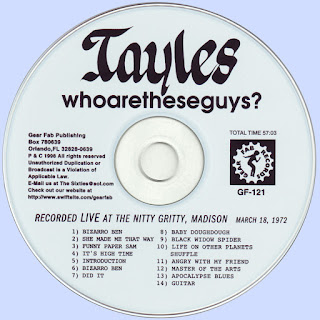