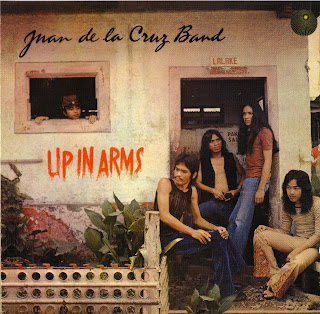 The Juan De La Cruz Band is one of the few less commercial electronic bands in the Philippines which claims to have more Western-orientated musician per square mile than any other country in the world. The impact of the group in the local hard and mellow rock scene is tremendous considering it was organized only 2 years ago. In December 1970, the band was featured in the first open-field rock festival in the Philippines, the "Antipolo Rock Festival."
The bands popularity gained terrific momentum in September of 1971 when it reaped a singular honor in backing-up the "Jesus Christ, Superstar" rock opera production at the Cultural Center of the Philippines (CCP). Then in December of the same year, the band garnered its crowning glory when again, for the first time in the Philippines, a rock group on its own, backed by a full symphony orchestra (the National Philharmonic) was presented in concert at the prestigious CCP.
No other group in the Philippines gained so much greater heights of success in relatively a very short span of time. This album debut is a monumental testimony. It is the first venture of it/s kind in this part of the musical globe. The Juan De La Cruz Band now reaches for a wider audience.
by O. Salazar, Billboard Magazine, Philippines 1971
Tracks 7 - 12 are not from the original album. They're released only as a very rare livetape in 1974 and the tracks are from either their second album Mascara or third album Himig Natin , and some where unreleased tracks too.

On Mascara and Himig Natin the band had menbers of the Japanese band Speed Glue and Chinki. On those albums Mike Hanopol joined the band who also made several famouse and rare solo albums. Wally Gonzales, the guitarist of "Up In Arms" and all other Juan De La Cruz Band albums released also the very rare solo album On The Road.

This album "Up In Arms"  was found so far only ones by a collector and the value of it would be something like $ 3000 or more, if a few more copies turned up. The later albums Mascara and Himig Natin have both a value of $ 1000,- and are very hard to find in nice condition. The same price and quality problem goes for Wally Gonzales and Mike Hanapol/s solo albums. Nothing realy survived from way back then in the Philippines. There was also a close relation between bands from Japan and the Philippines, but the musical influence is USA. Most releases go in the direction of heavy Psychrock with an Progressive touch. Juan De La Cruz was really a liveband (which you can hear on the extra tracks on this CD). They/ve played big audiences in the Philippines because not many Western band made it over there (maybe for political reasons).
Normal-recs 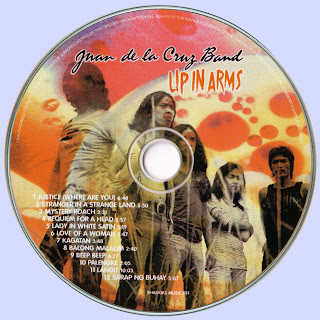 Free Text
Just Paste
Posted by Marios at 9:23 AM 5 comments: