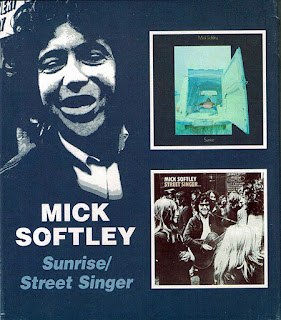 Mick Softley was a troubador in the classic mould; a drifter with a guitar slung over his shoulder, his songs drawn from his surroundings and his wonderful singing voice inflamed by social passion (a Londoner, his mother had worked for a time in the offices of Sylvia and Christabel Pankhurst). In the winter of 1959 he lost his job as an apprentice engineer and set off for Spain to follow his muse, with a mate of his, another Mick, on the back of a motorbike - which with almost tidal inevitability broke down. Eventually Softley found himself in Paris where he hooked up with numerous other dispossessed British beatniks, including Wizz Jones, Clive Palmer and Alex Campbell, who encouraged and mentored the inexeperienced singer. Returning to the UK in the early 60s, Softley discovered that the folk-protest movement was in full swing, and gripped by artistic fervour he started up a folk club in Hemel Hempstead, soon to be home to the likes of Mac MacLeod, Maddy Prior - and a young singer named Donovan Leitch, who by 1965 rapidly, meteroically almost, became a bona-fide star. Luckily Donovan remembered the favours he owed to Softley and it was through him that Softley’s debut album ‘Songs for Swinging Survivors’ came to be recorded – Donovan also recorded a couple of Softley songs on his debut records, including ‘The War Drags On’ on his EP ‘The Universal Soldier’ which made the Top Ten.
After a lengthy spell of wandering, it was Donovan who convinced Softley to record again in 1970, introducing him to producer Terry Cox who had by that time already worked with Sandy Denny, the Fairports, Yes and (the today sadly overlooked) Allan Taylor. Cox assembled a truly phenomenal cast of musicians to back the singer, including Trees’ guitarist Barry Clark, Fotheringay’s Jerry Donahue, Pat Donaldson and Gerry Conway, plus Lyn Dobson, Richard Thompson and Doris Troy, and together they recorded three albums – including the two reissues to hand now. Times had changed, folk was no longer fashionable and although this was the era of “progressive rock”, it was also the heyday of the singer/songwriter with artists like Cat Stevens, Jackson Browne and James Taylor dominating the US, and in Britain home-grown acts such as Roy Harper, John Martyn and Nick Drake all rising to prominence. Mick Softley’s incredible singing voice plus the fact that he had matured as a songwriter meant that his music was now easily as good as any of his contemporaries, and Tony Cox’s lush arrangements and production was quite simply the icing on the cake.
‘Sunrise’, the debut LP for CBS released in 1970, arrived in a full-colour gatefold sleeve and was filled with songs about earth, nature and the universe, Softley’s concerns by now being more environmental (and bodily!) than social. The stand-out track is arguably ‘Time Machine’, a song about reincarnation which became Mick’s best known song, thanks largely to it being included on the ‘Rock Buster’ double compilation LP from CBS which also featured tracks by Dylan, Soft Machine, Spirit, the Byrds, It’s a Beautiful Day, Johnny & Edgar Winter, Santana, Trees, Robert Wyatt and Poco. That sold a few copies! I well remember it being a regular in almost every second-hand shop “record bin” well into the 1980s. Another cut from the album, the exquisite ‘Waterfall’, also appeared on the CBS ‘Together’ sampler. ‘Ship’s another personal favourite, with a stunning lead guitar line from Barry Clarke and a synthesiser adding a suitably spaceward-bound rumble to the proceedings as the ship in question blasts into orbit; and the long closing track ‘Love Colours’ has an eastern feel thanks to some sitar from reedsman Lyn Dobson.
‘Street Singer’ followed in 1971 and, despite (or maybe because of?) featuring even richer and more expansive production values to ‘Sunrise’, it’s a patchy album in comparison – helped in no small part to my mind by the inclusion of some good-timey jazz and ragtime pieces, enormously clever and probably hilarious in the studio when performed by the musos present but not really bearing repeated listenings. There’s a few nice moments of Softley uplugged though, particularly ‘Gypsy’ which features some tasty harmonica playing from Steve Hayton (of Daddy Longlegs!) and the Donovon-esque ‘Water Sister Water Brother’. The closing ‘New Day, New Way’ gives the album a rousing climax – one of my own favourite pieces on here with some striking backing vocals from Doris Troy.
After one more album, ‘Any Mother Doesn’t Grumble’, Softley once again drifted away from the scene for ten years or so – eventually recording three now extremely hard to find solo acoustic albums for Doll Records of Switzerland, and subsequently retiring to Ireland.
by Phil McMullen 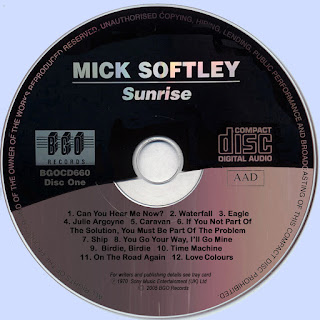 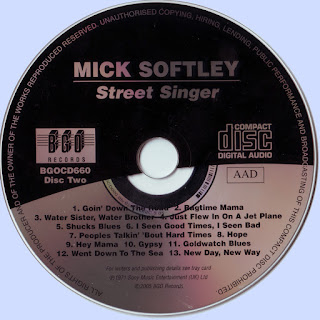