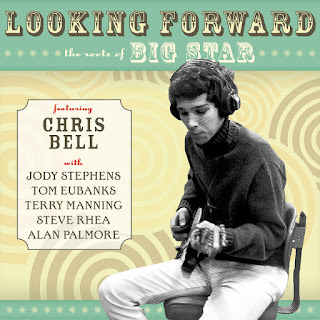 Perhaps 2017 will finally right the cosmic wrong that keeps Chris Bell a cult figure, relegating his memory to being “the guy that left after Big Star’s first record” or as a lesser-heralded member of “the 27 club”. Before the year is out, the first comprehensive biography of his life, Rich Tupica’s There Was a Light: The Cosmic History of Big Star Founder Chris Bell, will be released. We’re also told to expect a comprehensive, six-LP box set, The Complete Chris Bell, which alleges to make good on the promise of its title.
Omnivore Records offers a stunning first salvo in the re-appraisal of Bell’s work with Looking Forward: The Roots of Big Star. Though it will be filed as such for practical purposes, this is not a “Chris Bell” record in the traditional sense of an artist-in-charge and at the front-and-center of things. It could even be argued that there is no such thing in Bell’s case, for this talented and tragic artist did not release a full-length collection of his own music during his lifetime. The highly regarded I Am the Cosmos collection released in 1992 by Rykodisc made available Bell’s post-Big Star recordings, which had failed to find a sympathetic record label before his death in a car accident in 1978.
Looking Forward: The Roots of Big Star collects material from when Bell was working at Ardent Studios between 1969 and 1971, leading up to the months immediately before Big Star’s formation. The album is credited as “featuring” Bell with a list of collaborators. Both Andy Hummel and Jody Stephens, Bell’s colleagues along with Alex Chilton in Big Star, appear among the many collectives credited here. Other significant contributors include Tom Eubanks, Terry Manning, Alan Palmore, and Steve Rhea, who also contribute to the excellent oral history in the liner notes. This loose group of musicians hanging around during the off-hours of the studio recorded under an assortment of names including the Wallabys, Icewater, and Rock City. That last group’s recordings were previously released by Manning’s own Lucky Seven Records in 2003 and comprise 11 of the tracks here.
Bell appears throughout these tracks as a trusted collaborator and guiding force. Only two of the cuts are credited solely to him, while he shares composition duties on another seven. He sings lead vocals on only four of the tracks and doesn’t even appear on “The Wind Will Cry for Me”. It is his defining guitar work and support vocals that form the most consistent thread throughout the collection and point the way to what will become the Big Star sound. In the group of musicians hanging around Ardent, Bell found a collection of kindred spirits, fellow pop-rebels who looked to England for inspiration while finding themselves growing up at ground-zero of Southern soul. They found joy not in grooving smoothly but rather lurching spastically.
The influence of the British mod and psychedelic music flows through these cuts in a way that distinguishes them from the sounds that Bell would develop with Chilton in Big Star, but the twisted pop sheen is already forming. Palmore’s “Feeling High” shows a clear Beatles influence, while Bell’s own “Psychedelic Stuff” evokes the Pretty Things, and “A Chance to Live” could be a lost track by the Move. Bell’s singing on the version of “My Life Is Right” first recorded with Rock City sounds more confident here, even, than on the version he recorded with Big Star. And the guitar tone on the collection’s opener “Think It’s Time to Say Goodbye” evokes “In the Street” from #1 Record.
Bell’s collaborators demonstrate themselves a talented bunch. There was something in the water or amidst the smoke floating in the air at Ardent Studios during the decade’s turn into the ‘70s. Eubanks, in particular, proves himself a versatile vocalist equally comfortable with a hard rocker’s rasp or a lazy psychedelic croon. Manning’s keyboards and synthesizers color the songs in a way that differentiates them from Big Star, offering more psychedelic flourishes, as in the backward masking on Bell’s “Looking Forward” or the pseudo-mandolin in “The Wind Will Cry For Me”, and his “Sunday Organ” is a standout instrumental contribution.
Listening to Looking Forward: The Roots of Big Star it becomes apparent that, without Chris Bell, there would have been no Big Star. The anthology makes it plain that Bell was one of the great collaborators in rock and roll history and adds further emphasis to just how cruelly the fates have treated him. Compiler Alec Palao makes all the right decisions in his selection and sequencing of these songs, presenting as complete a portrait of an artist still in formation as is possible, offering all sides of Bell: singer, songwriter, lead guitarist, accompanist, and, ultimately, catalyst.
Pop Matters, 30 June 2017 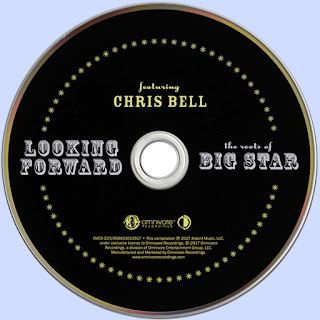