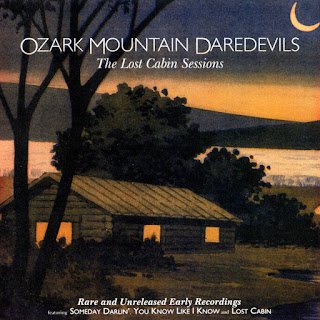 The Lost Cabin Sessions are the Ozark Mountain Daredevils’ first studio recordings from 1972. To my knowledge these early recordings were first officially released sometime in 2003 off the Varese cd label. The band would go on to become a well known and very successful country pop group similar in sound to the Eagles or the Pure Prairie League. While that sound is a bit commercial and somewhat formula driven, these early recordings represent something a little different. These 18 songs highlight a wonderful group whose sound was caught between the less bluesier aspects of early Little Feat and the astute folk country leanings of the Byrds, circa 1970.

The group had gotten together in the early 70s when Larry Lee and Steve Cash had met John Dillon at a local pizza parlor. At the time Dillon had said to both Cash and Lee “Look, I’m playing in a pizza parlor, they’re not paying me anything but I get to eat and drink all I want,” Lee replied, “Well I will play with you!” Eventually Buddy Brayfield, Randy Chowing and Michael Granda came into the fold. The Ozarks had five strong songwriters who individually brought something new and fresh to the pizza table. Being isolated in the mountains meant that they could only rely on each other for influence. Over a short period of time they would develop into a strong, cohesive unit, whose sound was highly original and roots based. The groups’ strength were their harmonies, songwriting chops, and a unique ability to fuse mountain boogie with both current and traditional country, folk, and pop music. The Lost Cabin Sessions takes 18 of the 28 tracks recorded during this fruitful early period.

It’s difficult to single out highlights on such a strong collection but personal favorites are the gorgeous country folk ballad Someday Darlin’ and the chugging country-rocker Long Time To Here. The latter’s catchy chorus and fine harmonica playing make it a near classic. A Satisfied Mind, the discs’ one cover, is given a good, sparse reading with great harmonies and a nice harmonica solo. Manager Paul Peterson remembers the recording sessions: “We were at a management office, showing our wares and Leatherwood was playing. I was sitting there, then, I felt somebody come in the room and sit behind me. And then as they got up and walked out, I heard their voice say ‘That’s a really good sound.’ I turned around to see that it was Neil Young.” Leatherwood is one of the more rock influenced numbers but it’s a good one, with catchy guitar figures and a hummable melody. Other tracks like Fly Away Home and Chicken Train hit a good authentic bluegrass vibe with rugged banjo playing and down-home mouthbow.

This is a terrific disc and probably better than any of the studio albums they would soon release. The performances are superb, the sound is underground country-rock and the playing is lived-in and timeless.
by Jason Nardelli 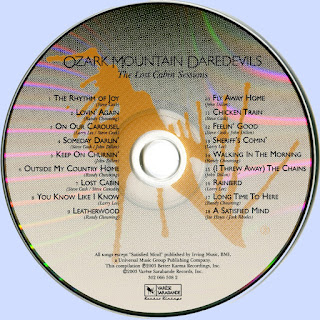