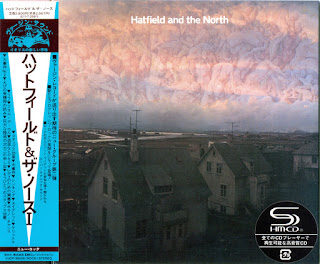 When Andy Tillison included a piece of music entitled The Canterbury Sequence on The Tangent’s debut album he certainly started something. Or more appropriately I should say he revived something, namely a highly creative musical heritage that dated back to the heady days of the late 60’s and early 70’s. Slightly to the left of the prog mainstream, the Canterbury scene was typified by a more avant-garde, jazzy approach whose key exponents included Soft Machine, Gong, National Health, Henry Cow, Egg and Hatfield And The North. It’s difficult to discuss the history of any one of these bands without reference to the others, so interchangeable were the various members. The line-up for the debut Hatfield album for instance was bassist and vocalist Richard Sinclair (Caravan), keyboardist Dave Stewart (Egg, National Health), guitarist Phil Miller (Matching Mole) and drummer Pip Pyle (National Health, Gong). Guests included saxophonist, flautist Geoff Leigh (Henry Cow) and Robert Wyatt (Soft Machine).

Although listed as individual tracks averaging around the 2 to 3 minute mark, 1974’s Hatfield And The North flows beautifully as one continuous piece of music. Subject matter is fairly redundant in this context allowing the bands sense of humour to reflect in the song titles which are often surreal (Gigantic Land Crabs In Earth Takeover Bid) occasionally juvenile (Big Jobs No.2 [By Poo And The Wee Wees] and quote from Monty Python (Your Majesty Is Like A Cream Donut). They have no issues in poking fun at themselves either as in Rifferama where the histrionic soloing is greeted with hysterical laughter (it has to be heard to be appreciated). If you’re unfamiliar with the Hatfields then describing their music can be equally perplexing. Jazz-rock excursions played with impeccable skill and timing (truthfully I can’t think of a more proficient quartet on the planet) is an obvious pointer but there is more to the band than that. The music is tastefully mellow and melodic for the most part with instruments juxtaposed in a complimentary fashion rather than colliding in a jarring clash of egos.

Shaving Is Boring is one of the few occasions on the debut album when they engage in lengthy soloing but the bass and drum work in particular reach such heights of excellence that they can be forgiven the indulgence. Vocals are sparingly used throughout often as wordless harmonies acting like a fifth instrument as is the case of Calyx and Fol De Rol. If one track summed up the band to perfection however then it would have to be Stewart’s Son Of 'There's No Place Like Homerton’. It demonstrates the keyboardist’s flair for complex, almost classical arrangements with subtle organ and piano punctuated by dramatic sax ala Frank Zappa’s The Grand Wazoo album. The dreamy female harmonies are surprisingly lush and deceptively intricate and there’s some by stellar guitar picking from Miller.

Bonus tracks are usually hit and miss affairs but those included on Hatfield And The North really hit the mark. Let's Eat Real Soon and Fitter Stoke Has A Bath were the respective A and B sides of a single released in November 1974 intended as a stop gap for their next album due early the following year. They are both jolly tunes with Sinclair adopting traditional lyrics (and a cockney accent ala Robert Wyatt). The final piece Your Majesty Is Like A Cream Donut incorporating Oh What A Lonely Lifetime includes characteristic fuzzed organ as a prelude to an instrumental section delivered with power and grace. It demonstrates the band at their best and made a fitting addition to a Virgin sampler album released in January 1975. Mindful of the debts incurred from recording the first album at Virgin’s Manor studios under the direction of Tom Newman, the Hatfields entered the On Saturn studios, Worthing in January 1975 to self produce their follow up. Released in March of that year The Rotters’ Club is generally considered to be their crowning glory and often receives a listing in the top prog albums of all time polls. It’s more strident than its predecessor with a greater contrast between tracks and an emphasis on fusion virtuosity. The sterling line-up of Sinclair, Stewart Miller and Pyle thankfully remained intact joined by such Canterbury stalwarts as Jimmy Hastings (flute, Saxes), Lindsay Cooper (oboe, bassoon), Tim Hodgkinson (clarinet) and Mont Campbell (French horn). Barbara Gaskin, Amanda Parsons and Ann Rosenthal (aka The Northettes) were once again on hand to provide the heavenly backing vocals.

Picking up from where the recent single let off, the opener Share It features Sinclair’s busy accented vocals (Park Life anyone?) with a very Emerson sounding synth solo (circa Trilogy from the album of the same name) providing a welcome respite at the midway point. Chaos At The Greasy Spoon benefits from a prominent bass line in the style of a certain Chris Squire which snarls and growls its way into Pyle’s The Yes / No Interlude, the albums jazziest instrumental workout. Stunning keys and sax interplay joined by distorted guitar gives the impression that this could be a spooky (and disturbing) soundtrack to a gothic horror movie. In contrast, the captivating Fitter Stoke Has A Bath (from the same writer) is an engaging diversion which in addition to the wry humour has an unpretentious majesty about it.

Didn't Matter Anyway is something of a departure and easily my favourite song on The Rotters’ Club. Sinclair’s bittersweet ballad includes a hint of mellotron but is most memorable for the sumptuous flute playing from fellow Caravan member Jimmy Hastings. The breezy instrumental Underdub is more in the traditional jazz style with electric piano and flute once again dominating. It leads into the 20 minute Mumps, Stewart’s magnum opus in four distinct parts. Your Majesty Is Like A Cream Donut [Quiet] opens with angelic female harmonies before the centrepiece Lumps displays a colourful range of emotions including melodic guitar and bass work giving way to restless fuzzed organ and a wailing sax break. Electric piano supplies a rhythmic under current throughout. Following the restless Prenut, where Pyle’s intricate drumming sounds not unlike Bill Bruford’s playing on The Fish (from Fragile), Your Majesty Is Like A Cream Donut [Loud] provides an uplifting, almost grandiose finale. The bonus material comes in the shape of three live tracks recorded at separate venues in ’74 and ‘75 as previously made available on the 1987 CD release. They are very welcome nonetheless demonstrating that the band were equally adept on stage as they were in the studio. The lively Halfway Between Heaven And Earth may be dominated by wall to wall vocals but it’s rounded off by a superbly articulate keys solo which curiously fades leaving Stewart suspended in full flight. The relatively brief Oh, Len's Nature! is probably the bands heaviest piece by far (on record) which has something of King Crimson’s 21st Century Schizoid Man about it. And speaking of KC, Miller’s acidic guitar work during his own Lything And Gracing has Fripp written all over it with the whole band coming together to end on an explosive note.

Although The Rotters’ Club charted at number 43 in the UK album chart the bands demise later that same year was put down to insolvency as well as internal issues. They would all go on to participate in other Canterbury combinations, most notably National Health. Richard Sinclair took a break from the music business to reappear in 1977 for a two year stint as the bass player in Camel. Dave Stewart had unexpected success as a singles artist along with Barbara Gaskin reaching number 1 in the UK and Germany. The pair continue to work together to this day preventing Stewart from taking part in several Hatfield reunions and live appearances which were sadly blighted by the unexpected death of Pip Pyle in August 2006. It’s a telling indictment when author (and Hatfield fan) Jonathan Coe was promoting his new book ‘The Rotters’ Club’ in 2001 that only the Italian and French interviewers remembered or expressed any interest in the music that influenced his book.

It’s interesting to speculate on what Hatfield And The North could have achieved had they stayed together for more than three years, a short career for any band. It was without doubt a unique combination of talented musicians that could have only emerged from the progressive rock genre, albeit of the jazz fusion vein. Often experimental but always superbly structured and melodic they leave behind two fine albums as a welcome reminder of a brief but illustrious career. The first in particular is one that I hold in high regard, sounding so fresh and vital on its initial release. Whilst the follow up was still a landmark release the bands style was understandably less of a revelation second time around. I also love the debut albums flowing continuity, possibly influenced by producer Tom Newman’s work on Tubular Bells the year before. The Rotters’ Club for its part boasts the bands lengthiest credited track (Mumps) but in comparison this is more a collection of individual pieces masquerading as an epic. I’m merely expressing a personal preference of course (and probably nitpicking to boot) because either way they are both excellent releases and are always worthy of re-evaluation.
by Geoff Feakes 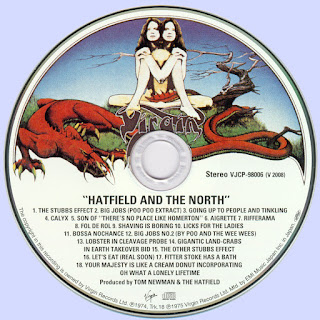