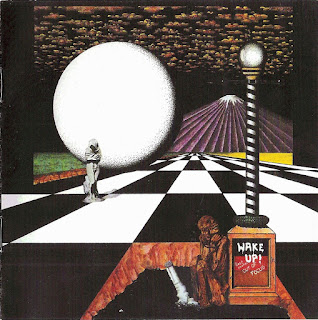 Wake Up! was originally recorded and released in 1970 by a band that seemingly lacked the wherewithal to manage such a thing. A practised and experienced live outfit that had made a name for itself in and around Munich, the members of Out Of Focus hit the studio for the first time having procured label support from Eckart Rahn’s Kuckuck which had established itself the year before. However, the band was usually stoned and their live set featured prolonged jams that could see them playing for 3 hours. The discipline and rigour of the studio presented a challenge to the band who had to be made aware of the need for accuracy, tuning and brevity. “It took them a bit of adjustment,” remembers Rahn.

Nevertheless, there was a genuine desire to allow the band their artistic freedom and capture something of the socially conscious, psychedelic, and slightly surreal live experience that had made them a popular act in the first place. So they had two long weekends to track the album and, on listening to it, it has that cohesive, driven quality that often comes from the exquisite pressure of time.

Opening with See How A White Negro Flies, we get an immediate sense of the musical direction this album is going to take. A heavy, plodding, psychedelic groove supported by a spectacular ‘walking’ bass motif combines tightly with Klaus Spφri’s energetic and busy drumming while Remigius Drechsler pulls off a riff that would turn Ennio Morricone green. Drechsler’s guitar work is a highlight of the album and the band’s overall sound. He combines spastic thrashing rhythm work with electrifying, fuzzed and distorted lead work as well as dealing in clean picked box-riffs and gently strummed atmospherics. You get a real sense of this range in God Save The Queen Cried Jesus which cycles through vivid shades and phases led as much by Moran Neumόller’s wonderfully dynamic flute work as his off-the-wall, impassioned and theatrical vocal delivery. Neumόller’s declamatory squawking is something of an acquired taste however, often sounding too much like a hangover from ‘60s American protest music, although occasionally, he sounds passingly like Jim Morrison.

Hey John is an extended jam on a rising and descending chord pattern held dramatically and melodically in tow by Neumόller’s flute. Again Spφri’s athletic drumming is powerfully supported at every turn with fluid and intuitive bass runs while Hennes Hering (organs, piano) and Neumόller interject lengthy improvisational solos over the shifting weight and changing light of the band’s delicately calculated soft/loud dynamic. No Name has a similar feel in its brief, shouty moment and is perhaps remarkable in that it predates by some 7 or 8 years the raucous, New Wave aggro of early Ian Dury And The Blockheads.

Out Of Focus’ strength lies firmly in their instrumental endeavours. With the two closing tracks being longer than ten minutes each, there’s plenty of scope for the improvisatory excursions that have served them well throughout the album. There’s little development of the formula, just energetic, occasionally frenetic shaping of the dynamics. It’s raw and vivid, but I’m not getting much out of it by the end, just roach burn.

This is a fairly convincing debut that mashes several strands of the underground scene from the late ‘60s into a blend of Traffic, The Doors, early (Saucerful Of Secrets) Floyd with the hard rock of The Edgar Broughton Band and Atomic Rooster. Having said that, Out Of Focus are resolutely their own band with their own sound and their own take on the underground music scene of their day. It has an immediate appeal, made all the more attractive by Ben Wiseman’s excellent remaster.
by Jon Bradshaw 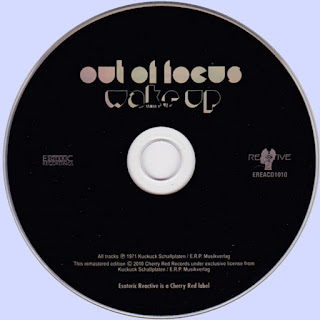