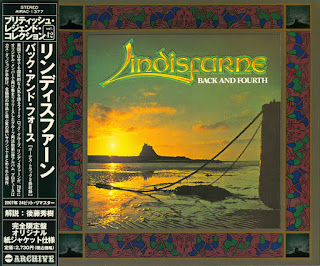 This was Lindisfarne's comeback album after a fairly dire patch in the mid-'70s. Back and Fourth (originally issued by Polygram) was smoothly commercial.
With its original lineup back together, Lindisfarne went for the gold this time, building their music on folk-like melodies (and a distinctly American sound, at that), country-type hooks ("King's Cross Blues"), and pleasing harmonies, exemplified by "Warm Feeling," where the group sounds like an earthier, edgier Firefall.
Alan Hull's writing also took on a trans-Atlantic character -- gone was the distinct English character of songs like "Fog on the Tyne," and in its place was a poppier American sound, with some brief, embarrassing digressions into funky R&B ("Get Wise"). "Woman," whose subject is no more ambitious than its title, would have been an embarrassment to Lindisfarne during the early '70s, but it was the kind of sound that didn't offend radio programmers, and "Run for Home" became a familiar track on FM radio even in America, where the band had scarcely made any impression in earlier years.
Producer Gus Dudgeon kept the instrumentation simple and the sound pretty much rooted in midtempo rock, and the result was a pleasing collection of new tunes.
by Bruce Eder 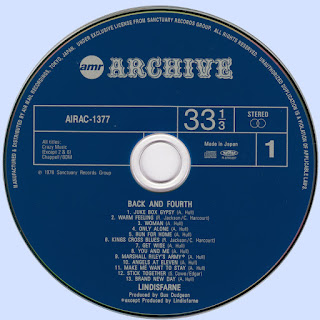